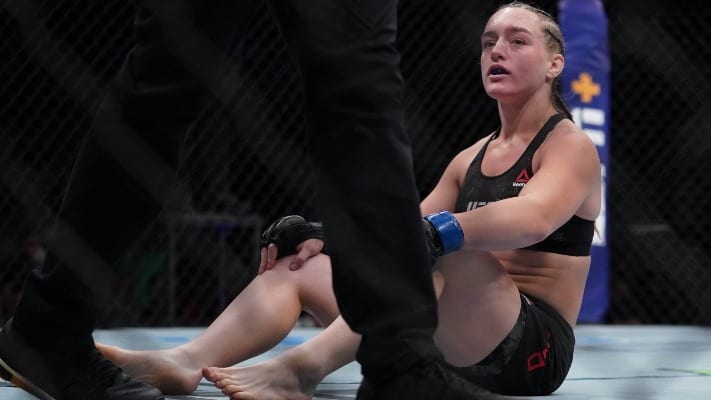 Bantamweight contender Aspen Ladd is injured and therefore unable to compete against former title challenger Sara McMann at UFC on ESPN 12 on June 27. John Morgan of MMA Junkie broke the news via social media, he wrote.

“Unfortunate news for a top women’s bantamweight contender: @AspenLaddMMA suffered an injury in training and is out of her fight next week with Sara McMann. I’m told her recovery could be anywhere between 3-9 months.”

Ladd returned to the winning ways last time out by stopping Yana Kunitskaya at UFC Washington in December 2019. Prior to that Ladd suffered the first and only loss of his MMA career. The 25-year-old was clipped early by renowned striker Germaine de Randamie who finished the rising star in just 16 seconds when they fought in the main event at UFC Sacramento in July 2019.

The #3 ranked bantamweight took to Instagram to announce she had been forced out of her fight with McMann and provide more details about her injury, she wrote.

“Unfortunately, for the first time in my career I’m being pulled due to injury. This is me right now, finally home after an #mri today and a long talk with a very good doctor. So here’s the timeline, I got injured on my last hard day of training last week but still planned on toughing it out and fighting, I didn’t realize quite how bad it was. I have been training on it since the initial injury to the best of my abilities and my weight was( is) super low already. So I was thinking I had this. Anyways, I had planned on getting a cortisone shot, and when I showed up to that appointment yesterday the concerned doc ultrasounded my knee, then booked the #mri stat . Turns out I just have a REALLY high pain tolerance. I have 2 grade 3 tears and a couple other injuries going on. I’ll know later this week Iif surgery is in my future, but hope to be back in the cage before the end of the year. Honesty is the best policy so here you go, sucks because I feel phenomenal otherwise #shithappens #timetofixit #ufc”

Are you disappointed to see Aspen Ladd will no longer compete at UFC on ESPN 12?