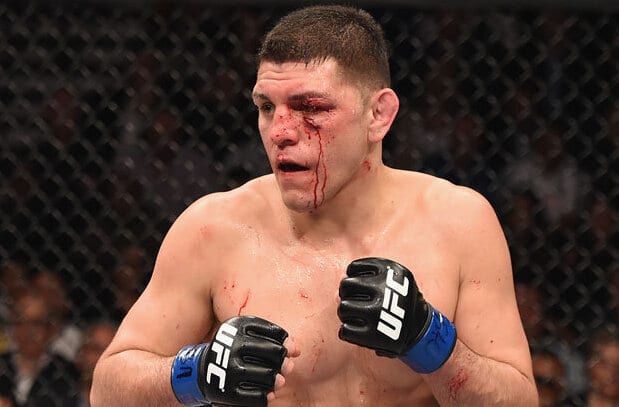 Ariel Helwani gave us all some exciting news yesterday, as he enlightened us of the potential return of Nick Diaz. It would be great to see him come back, he left us all wanting more when he walked away.

“”This is Nick Diaz earlier today. He weighs in the 175-165 pound range, per his manager Kevin Mubenga. He just completed a 14-week diet and training regimen. This is the first time he cuts weight in approximately four years, Mubenga said. Diaz wanted to do a test cut because …

“… he is keeping a close eye on the big welterweight fights coming up. He is “100%” planning on fighting again, per Mubenga, and is targeting an early 2021 return.”

Former Bellator and ONE Championship Welterweight Champion Ben Askren made a comment on the Stockton natives plan to return:

“There are some guys people will watch no matter what! Even if they haven’t won a fight in almost a decade. I’m in for a Diaz comeback.”

We thought maybe we’d get to see him come back this year, as he stated that he wanted to return around the time his brother fought Jorge Masvidal in an interview with Ariel Helwani.

On Diaz’s social media over the last few years, it didn’t look like he’d been doing much with his life or career aside from partying. Of course he’s still training, he’s a true martial artist, but he was living the party life there for a while. He’d gained some weight, and every time we heard him talk, he sounded drunk.

Diaz has always spoken a bit differently than most, he and Nate both do, but it’d gotten worse. He slurred his words often, ranted about meaningless topics, went off topic during his rants, it was kind of sad to see. Now it looks like he’s motivated for a comeback, and this is great news!

Diaz hasn’t fought since January of 2015, and he wasn’t the most active upon returning to the UFC. He had two fights in four months against BJ Penn and Carlos Condit, but didn’t fight Georges St-Pierre until 13-and-a-half months after the Condit fight, and didn’t fight Anderson Silva until almost two years after his St-Pierre fight.

We never got to see how good Diaz really was, he got suspended too many times, then just left the sport at only 31 years of age. He was at his best, in his prime years, and it just didn’t work out for him. It’s so unfortunate seeing wasted talents, and he and his brother both are at least to some extent.

After being away for so long, he shouldn’t be fighting a top guy, but we all know how the Diaz’s are. If they aren’t getting someone with a name, they won’t sign the contract. It wasn’t always like that of course, but later on in their careers it has been.

It’ll be very interesting and exciting to see how this plays out.

Who would you like to see Nick Diaz face upon returning to the octagon?