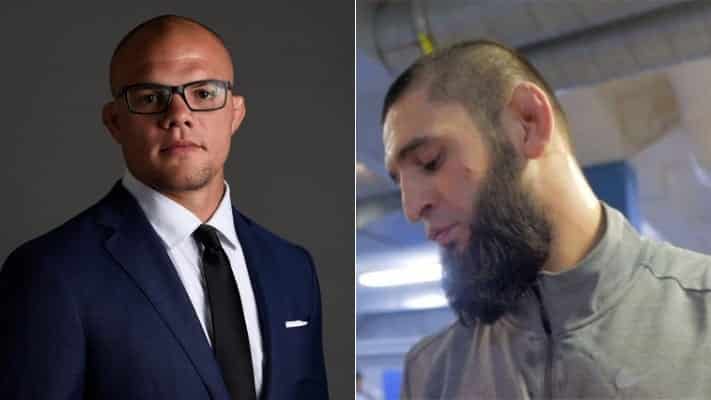 UFC light heavyweight contender, Anthony Smith, has been through his fair share of trials and tribulations.

The former title challenger made his debut back in 2013, where he picked up a severe knee injury. This subsequently lead to him being cut from the UFC, after only 1 fight.

Smith would have to put together a 7 fight win streak on various regional promotions to earn a second chance in the UFC.

Having come through such adversity allows Smith to empathise with the current situation surrounding Khamzat Chimaev.

Chimaev is suffering the long-term effects of covid, which appeared to lead him to retire. He has since rescinded his retirement, following a conversation with Republic of Chechnya leader, Ramzan Kadyrov.

Speaking on Sirius XM, Smith attempted to give some insight into Chmiaev’s current mindset.

“You look at the hill, and sometimes, it doesn’t even seem like it’s worth it. When you’re injured, and it just seems like a mountain you can’t climb,” he said. “When I hurt my hand after Gustafsson, and then the surgery failed, the bones shifted again, the plate broke, and they had to do it again. Sometimes, when your body betrays you, it seems like it’s just too much and you’re never going to be the same, and if you can’t be the same, you don’t want to compete if you can’t be the same.”

The fact that Khamzat was breaking UFC records as the much active fighter in modern MMA undoubtedly only made things worse for him. Anthony Smith also reveals the impact of a forced hiatus can have on an ultra competitive athlete.

“Through this, through injuries, through sickness, it doesn’t matter how hard you work. It just takes time. And fighters aren’t patient” (as transcribed by MMA Fighting)

While Khamzat’s rehabilitation process will no doubt take a substantial amount of time, Smith is certain that we will once again see him in the octagon, back to winning ways.

Things start to get better, day by day,” he said. “I have no doubt that Khazmat will be back.”

Smith himself is currently coming off a win against Devin Clark, and is set to face talented prospect Jimmy Crute next at UFC 261.