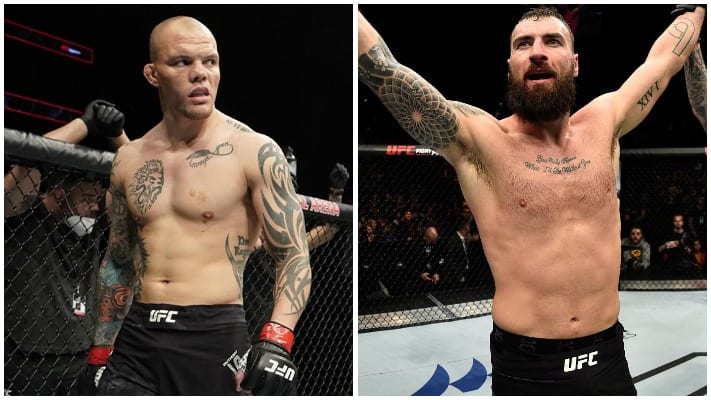 Former light-heavyweight title challenger Anthony Smith is open to facing off against Paul Craig next after quickly dispatching of Devin Clark to get back in the win column at UFC Vegas 15.

Smith went in to his fight against Clark off the back of two tough losses against Glover Teixeira and Alexander Rakic. He admitted at the UFC Vegas 15 post-fight press conference he had almost forgotten what it felt like to win.

“You forget what it feels like to win,” he said. “I remember what a loss in 2006 felt like as an amateur. I think I put a lot of pressure on myself. I don’t know, it’s been a crazy goddamn year, and it hurts even more when you’re losing to people you know you can beat. Had Glover been a three-round fight, I would have won that fight. Had I not gotten the two leg kicks, I’m fairly confident I beat Rakic. Both of those guys did great jobs, they’re both incredible competitors. Sometimes, the shoe just drops like that. It’s just the break-in, and COVID-19, and getting my teeth knocked out, it’s just a mess, so it feels really good back where I belong.”

‘Lionheart’ went on to explain that he was feeling more pressure than ever heading into his fight with Clark.

“I’m not exactly sure why,” he said. “This one was heavy, though. I don’t know if the stakes are higher, or if it’s in the spotlight. When I was back on the regional scene, no one gave a sh*t cared. I’d lost three or four in a row, and they’re like, whatever. But the whole world is watching when it happens now, and you hear the whispers. Where’s his head at? Is he back to soon? Is he healthy? Does he really want this? Is he too focused on the desk? Is he too worried about his pretty teeth. I hear it all, so you don’t want to prove those people right, and that’s where the pressure comes. And then it’s just a spiral down from there, because then you’re worried about everything else.

Paul Craig, who is coming off an emphatic win over Mauricio ‘Shogun’ Rua took to Twitter to call for a fight with Smith who is down to make it happen.

“I think I saw something about Paul Craig had brought my name up,” Smith said. “That’s a fun matchup. That’s a fun grappling matchup. I love his style. I could listen to his interviews forever. As long as I have enough time to get ready, I’m good.” (Transcribed by MMA Fighting)

Do you want to see Anthony Smith vs. Paul Craig?