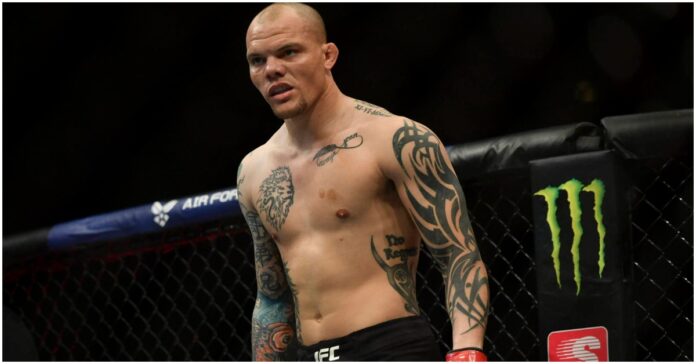 Anthony Smith and Aleksandar Rakic were poised to meet in a potential rematch in December, after Smith made the callout following his impressive first-round submission win over Ryan Spann.

However, ‘Lionheart’ suffered a knee injury and a staph infection which is going to keep him on the side-lines until early 2022.

Just recently it came to news the UFC is potentially looking to book a bout between former champion Jan Blachowicz and Aleksandar Rakic, leaving Smith to just stand by a watch, something that didn’t sit well with him.

“I’m afraid because I’m indifferent (about who I fight next), I’m going to get left out in the cold,” Smith said during an appearance on The Fighter vs. The Writer. “It would be a real sh*tty deal if Jiri Prochazka gets the title shot and then Rakic and Blachowicz fight each other and that kind of leaves me sitting out with my hands out.”

Smith has been trying to rematch with the Austrian ever since he was beaten by him back in August of 2020. Anthony Smith also doesn’t think it is fair for Rakic to be in the position he is when he is turning down fights.

“I know for a fact he’s turned down several fights since his last fight with Thiago Santos, it would be super unfortunate if Rakic gets to sit around and turn down the fights he doesn’t like and gets the biggest fight available in the division.

“That would hurt my feelings, to be honest with you, especially being a guy that takes every single fight offered and the ones that nobody wants.

“Nobody wants to fight Ryan Spann. It’s a tough out. He’s just tough. Whether you think you’re better than him in every aspect of the game, he has that equalizer right hand that just changes the whole trajectory of the fight.

“No one wants to fight Devin Clark, cause it’s just a tough fight for no reason. You don’t get a lot out of it, and it’s a tough ass dude.”

Anthony Smith wants to take on the former champ Blachowicz

Smith himself is currently riding an impressive three-fight winning streak with all those wins coming via stoppage. Although he would love to run it back with Rakic and get that win over him, he sees more value in facing off against the former champ Jan Blachowicz.

“He’s not the UFC’s favourite guy. Beating him is kind of its own reward, personally. Because I’m not sure how highly people, the powers-that-be, would look upon that win.

“He’s not super exciting for as big as an athlete as he is, and impressive as his physique is, he doesn’t fight like that. So, he doesn’t have a fan appealing style.

“The people in his home country love the hell out of the guy, but everyone else can kind of take him or leave him. The win over Blachowicz looks better. The Rakic one makes me feel better.” (Transcribed by MMAFighting.com)

Only time will tell for Anthony Smith on how the future of the light heavyweight division plays out, but despite this bump in the road for the American, whoever he does face on his return is in for one hell of a fight.

READ MORE:  Michael Chandler calls for BMF title fight with Jorge Masvidal: 'Tell me that wouldn't get the juices flowing'

Who would you like to see Anthony Smith take on when he returns from injury?