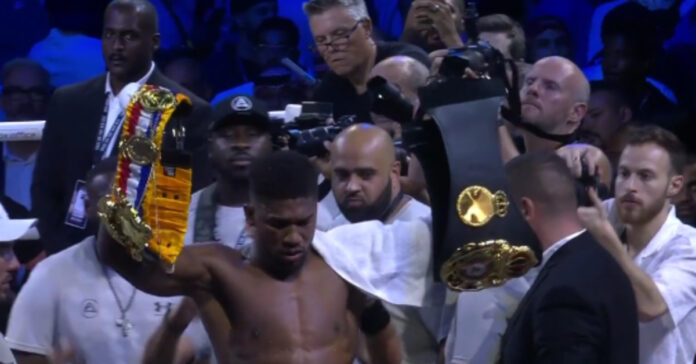 Usyk successfully defended his WBA, WBO, and IBF titles earning two of the three judges’ scorecards. One judge saw it in favor of Joshua 115-113, but was overruled by the tallies of 115-113 and 116-112 in favor of the defending champion. Fuming from the loss, Joshua grabbed two of Usyk’s titles while in the ring and threw them to the outside before exiting towards the backstage area.

Anthony Joshua then returned to the ring, grabbed a microphone, and proceeded to steal what was supposed to be a celebratory moment for the Ukrainian world champion.

“If you knew my story you would understand the passion,” Joshua said. I ain’t no amateur boxer from five years old that was an elite prospect from youth.

“I was going to jail, I got bail, and I started training my arse off, I wanted to be able to fight.”

After hijacking the microphone, Anthony Joshua gave Usyk a moment, recognizing him as the heavyweight champion of the world and leading the crowd in a cheer for the man that beat him not once, but twice.

“I’m stealing this Usyk I’m sorry, but it’s because of the passion we put into this. This guy to beat me tonight, maybe I could have done better, but it shows the level of hard work I put in so please give him a round of applause as our heavyweight champion of the world.

“And as I said, I was studying Ukraine and all the champions that come from your amazing country, but I have never been there. But at the same time, what’s happening there is, I don’t know what’s happening, but it’s not nice.”

Anthony Joshua was then promptly escorted away from the situation before the UK native could further embarrass himself. Following his antics inside of the ring, fans took to Twitter and immediately started comparing the incident to the infamous Kanye West and Taylor Swift moment at the 2009 MTV Video Music Awards.