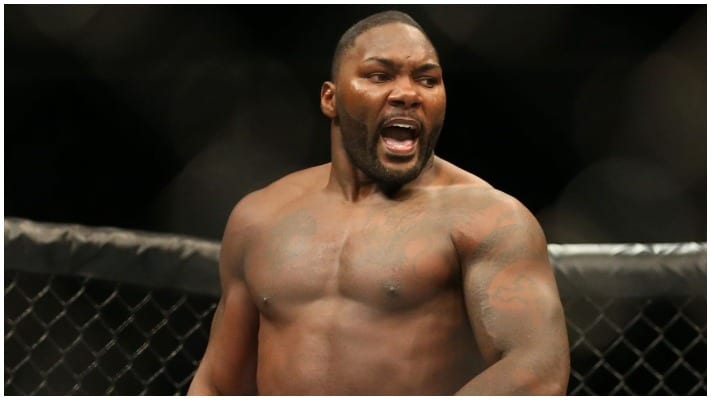 Anthony Johnson will thankfully still make his return to MMA at Bellator 258.

‘Rumble’ was set to square off against Yoel Romero in what would’ve been both men’s promotional debuts.

Unfortunately, that fight fell through last week when the Cuban failed his pre-fight medical.

Bellator did not announce a specific cause of the failed medical.

Ariel Helwani revealed an issue with Romero’s eye was the reason for his withdrawal from the bout.

The ESPN reporter also got the scoop on who would replace Romero at Bellator 258.

Before retiring in 2017, Johnson was one of the most feared knockout artists in MMA. ‘Rumble’ fell short in his lone UFC title bid against Daniel Cormier but holds several high profile wins over the likes of Alexander Gustafsson, Jimi Manuwa, Glover Teixeira, Phil Davis and Bellator heavyweight champion, Ryan Bader.

Augusto made his Bellator debut in April. The 29-year-old Brazilian quickly dispatched of Johnathan Wilson, scoring the submission victory inside one round. He’ll be looking to get the biggest win of his MMA career and stretch his unbeaten run to eight later this week.

Do you think Anthony Johnson will enjoy a winning return at Bellator 258?