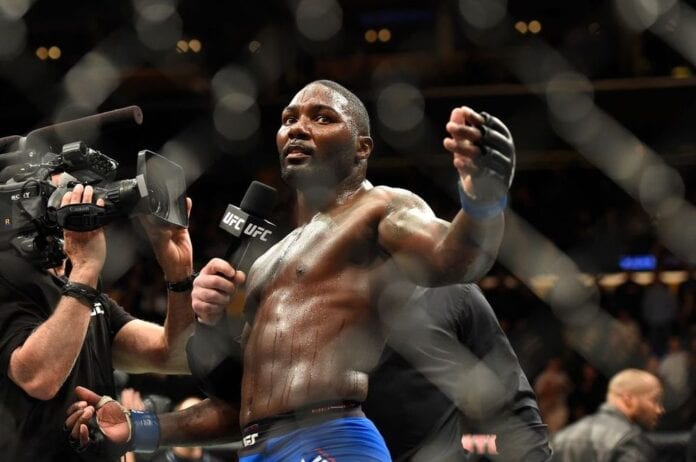 Anthony ‘Rumble’ Johnson is finally making his return to the UFC octagon after over three years away, despite how he feels about fighters not knowing when to walk away. The former two-time UFC light-heavyweight title challenger retired after his second defeat to Daniel Cormier at UFC 210 in April of 2017.

Since retiring, Johnson began bodybuilding, and not long after became an ambassador for Bare Knuckle Fighting Championship (BKFC). But now he’s got the itch again, and at 36-years-old, he doesn’t have much time left to make a comeback. More or less, now’s the perfect time.

The one very unfortunate thing about this however, Jon Jones announced he’s vacating his UFC Light-Heavyweight Championship, and that’s one dream fight we never got to see.

”Rumble’ was supposed to face Jones for the title at UFC 187 in May of 2015, but this was one of the many times Jones got suspended, and he ended up facing Daniel Cormier instead. We’ve seen twice that Cormier’s the better man, but he’s not around anymore either, and Johnson’s the scariest light-heavyweight this sport has seen.

That doesn’t mean he’s the most technical or best fighter out there, but the pure raw power he possesses is truly scary. Of his 22 wins, he has 16 knockouts and six decisions, and ten of those knockout wins were KO’s. Better yet, he went 6-2 in his recent return to the UFC and scored five knockouts with four KO’s then, with the only TKO being over Alexander Gustafsson.

His manager, Ali Abdelaziz announced that he’s back in the USADA testing pool, which means he’ll be eligible to compete soon.

If he can come back at his best, it’s going to be incredibly exciting to see what happens, the 205 lb division is thriving beautifully right now. When asked at the BKFC 12 press conference earlier today why now is the right time to return to the UFC, ‘Rumble’ had the following to say on the matter:

READ MORE:  Jared Gordon reflects upon his struggles with MMA ahead of UFC 278: “It Only Made My Life Worse”

“I just don’t wanna be one of those guys that gets mopped up, but I still feel good, I have no injuries. While I was in the UFC, I didn’t really get hit much unless I lost, and that wasn’t often. But, you never know. You know, I got a couple more fights on my contract with the UFC, and then after that you know, I may fight for Dave (Feldman).”

Who would you like to see ‘Rumble’ fight upon returning to the octagon?