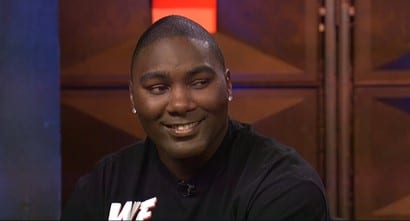 No. 5-ranked UFC light heavyweight Anthony “Rumble” Johnson was last seen knocking out Antonio Rogerio Nogueira in the co-main event of July 26’s UFC on FOX 12 from San Jose, California, to win his eighth straight bout. Soon thereafter, he said he was willing to fight anybody.

However, once Jon Jones was injured and forced out of his awaited UFC 178 clash with Daniel Cormier and the bout was rescheduled for January 3’s UFC 182, “Rumble” began campaigning for a fight with the man that originally had a shot at Jones, No. 1-ranked Alexander Gustafsson.

Johnson said it was basically a foregone conclusion that he and “The Mauler” square off, but Gustafsson had other ideas. The Swedish slugger confirmed that UFC owner Lorenzo Fertitta had promised him the winner of Jones vs. Cormier.

But that doesn’t mean that Johnson is going to stay out of the limelight. That’s hardly the case, in fact.

“Rumble” is staying busy by keeping a running war of words going with former Blackzilians teammate Alistair Overeem, the man allegedly responsible for injuring Jones while the two trained at Greg Jackson’s MMA in New Mexico. Johnson confirmed that Overeem constantly tried to injure his teammates as well under the guise of doing it “accidentally”:

“I just figured when I first heard he was hurt that it was an accident with one of his usual training partners, not some one who’s just come in and has hurt him. Greg Jackson says it wasn’t on purpose, but I know the man and when he was here he was always hurting somebody. Accidentally on purpose. And it ain’t because he’s clumsy, he ain’t clumsy, he would just hurt you.

I’ve seen the guy do it. I’ve seen him basically bullying and stuff. Now I can’t speak on what happened with him and Jon because I wasn’t there. They could have been training like pro athletes and really just pushing each other and a freak accident happens. And I hope Jon recovers and comes back stronger. But if it really wasn’t an accident, then I feel sorry for Jon and I hope he recovers regardless. But when Overeem is involved, it is what it is.” – via Fighter’s Only

“The Demolition Man” was quick to reply to Johnson, see here, calling Johnson out as a “pussy” and leaving the door open for a fight between the two ex-training partners.

“”Rumble” continued his not-so-glaring recommendation of the bruising former DREAM and Strikeforce champion, taking their beef to the next level with some harsh criticism for Overeem on Twitter:

How can Overshit call me a pussy when he ducked JDS? Biggest pussy in the heavyweight division. I know the truth kid lol a cpl of us do!

It sounds like this battle is going to rage on and on until they finally settle their differences in the Octagon. Reportedly weighing around 210 pounds prior to his heavyweight match-up with Ben Rothwell at this Friday night’s (September 5, 2014) UFC Fight Night 50 from Foxwoods Resort Casino in Ledyard, Connecticut, will Overeem return to 205 pounds to take on his dangerous nemesis “Rumble?”