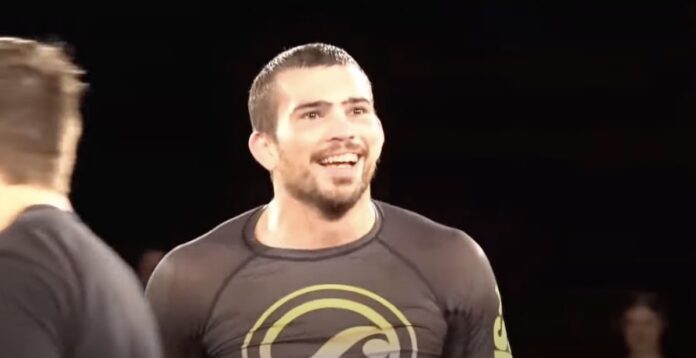 Andrew Wiltse was born in California, but spent most of his youth in Michigan. His family moved to California while his mother was pregnant, because she wanted to open a store selling healing crystals.

Andrew’s father didn’t like California and moved back to Drummond Island, Michigan with Andrew and his brother Sathya. He would spend most of the year with his father and summers with his mother.

While visiting his mom one year, Andrew Wiltse began taking Judo lessons near her mother’s crystal store. Wiltse would get really into training Judo and would spend most of the summer there, while his mother worked.

He would earn his blue belt in Judo before returning to Michigan Wilste wanted to keep training Judo. His father found a local Judo practitioner in Drummond Island named Mike Ogden.

Since Drummond Island was small, Andrew would regularly have one on one private classes and progressed rapidly.

Andrew’s instructor Ogden wanted him to test his skills in competition. At 16, Wiltse competed in an amateur MMA event. He was submitted in the first moments of the fight by a flying armbar but was not discouraged.

Pedigo would roll with Wiltse before leaving and saw potential in the young grappler. Inviting Andrew to come to Mt. Vernon, Illinois to train at his gym whenever he wanted.

After Andrew Wiltse started college, he learned that Pedigo had a scholarship program for young fighters. He contacted Pedigo and Heath told Andrew that if he wanted to develop his skills, he’d need to leave Michigan.

Heath offered Andrew a scholarship for one year to come and train in Mt. Veron. Pedigo told Wiltse if he gave him that one year that he would turn Andrew into a top BJJ competitor.

Andrew Wiltse jumped at Pedigo’s offer and made the trip to Mt. Vernon, Illinois to join Pedigo Submission Fighting.

Pedigo Submission Fighting is a hard nose no frills located in the countryside of Illinois. Based out of an old debilitated building that used to be a laundromat.

The students of Pedigo’s gym roll hard and Andrew would get a tough lesson. He would routinely get beat for hours a day in training, but he wouldn’t quit.

Instead, he would spend hours drilling different techniques and doing thousands of repetitions of each. Quite often until his hands were bleeding from gripping Gis and breaking grips.

Through this hard nose style of training. Wiltse would become a tough competitor at the colored belts.

Andrew Wiltse makes a name for himself in competition

Wiltse as a white belt began getting success early on. Through his scholarship, he could enter BJJ competitions and would compete frequently.

His determination and efforts would lead to him winning his first major title at the Pan Beginner Championship. This win would lead him to get promoted to blue belt and go to the next level of competition.

Andrew’s stay at the blue belt rank would last from 2015-2016 and would be highly successful. During this timeframe, he won his first IBJJF World Championship taking double gold in the 2015 competition.

He would spend 2017 at purple belt and win his 3rd No-Gi World Championship and place 2nd at Gi Worlds. Andrew Wiltse had proved he was one of the promising young talents in Jiu Jitsu as he would earn his brown belt.

At brown belt, he would continue proving himself as he added more medals to his collection. Winning his 4th No-Gi World Championship and first in the Pan No-Gi Championship again.

Through his hard work and winning multiple championships, Wiltse would earn his black belt in December of 2019 from Heath Pedigo.

During late 2018, the website Flograppling began a documentary series on the Pedigo Submission Fighting Team. It was called Daisy Fresh, named after the laundromat that used to be in the Jiu Jitsu school.

The documentary showcased Andrew Wiltse and the other 11 BJJ athletes that lived in the gym. Including his brother Sathya who became a world champion at purple belt.

Even though there were multiple top Jiu Jitsu competitors from the gym, none of them had very much money. They had dedicated their efforts to making Pedigo Submission Fighting one of the best gyms in the US.

In that dilapidated building, the PSP crew train for all day and sleep on the mat at night. Literally spending every moment of their days on the mat training and sharing meals together.

This docu series has gotten rave reviews and has currently completed two seasons.

Wilste has developed a highly technical style that is as rough as the gym he calls home. He is known for his blitzing style passing, butterfly guard, and back taking ability.

A perfect blend of technique and aggression that he has used to beat some of the world’s best competitors. From the Daisy Fresh series, Andrew credits his love of Panda Express’ orange chicken for giving him the power to win.

Andrew has only been competing at the black belt level for a little over 2 years now. He didn’t get to compete as much in 2020 due to the pandemic, but has been making up for lost time.

Andrew Wiltse made his black belt debut at FTW 144 toward the end of 2020. It would be a successful debut as he submitted Isiah Wright by RNC.

He would win a referee’s decision against John Combs at FTW 146 and win by points at a Sub Spectrum event. Andrew would lose his next match at another Sub Spectrum event, losing by heel hook to William Thackett.

The loss didn’t discourage Andrew and he went back to the gym to prepare for the 2020 Pan No-Gi Championship. This would be his first IBJJF event since being promoted to black belt.

Andrew Wiltse would make his presence known as he beat all 3 of his opponents to win his first black belt medal. Beating former world champion Pedro Rocha in the finals.

After winning his first IBJJF gold medal at black belt, Andrew would compete at WNO 6 & 8 in early 2021. Winning his WNO debut against PJ Barch by decision and submitting David Garmo in his second WNO appearance.

In his second Pan No-Gi Championship, he would have a good run, but come up short in the finals. Losing a referee’s decision to Jeferson Guaresi.

He would bounce back from that loss at WNO 10 by submitting Gabriel Almeida.

You would be hard pressed to find a BJJ competitor that has worked harder than Andrew Wiltse. He has fought for everything he has earned to make a name for himself in Jiu Jitsu.

The work he has put in is now paying off and he is reaping the rewards. On top of becoming a No-Gi Pan Champion at black belt, Andrew Wiltse is now a featured instructor for BJJ Fanatics.

At 29 years old and only two years into being a black belt, Andrew Wiltse is about to hit his prime. Wiltse will look to become Pedigo Submission Fighting’s first ever black belt world champion.