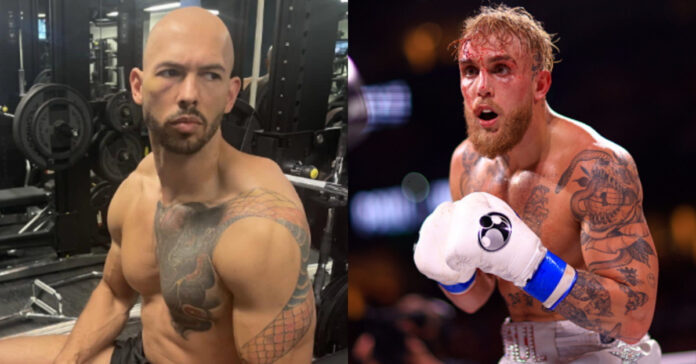 The controversial kickboxer is said to have recently met with Paul’s manager Nakisa Bidarian to work out the details of a potential showdown between the two inside the squared circle. Andrew Tate has been out of competition for the last five years but has stayed relevant on social media with his TikTok videos amassing nearly 12 billion views with his often controversial and misogynistic views.

With rumors of a fight between the two social media stars coming together, a former opponent of Andrew Tate is stepping forward to call bullsh*t on Tate’s online persona. El Boustati faced Tate for the Enfusion 90kg world championship back in 2016. Boustati scored a victory over Tate just minutes into the contest. With Boustati landing a number of heavy shots in the opening moments, the Brit complained of an eye injury and asked the referee to stop the bout. Later on, it was revealed that Tate had suffered from a detached retina, but Boustati finds that hard to believe.

“The most painful thing for him was that he lost his belt, the only thing he ever loved,” Boustati said while speaking to The Mirror. “He came out of retirement for me to defend the belt, he lost it in the first round to a left hook in the head, the video is out there and directly after that he was defending himself saying he already had an injury on his eye. But when I look back, it was all a reason to protect himself for the time he’s living in now so people couldn’t say he’s not the champion he claims to be.

Since the alleged injury took place, Andrew Tate competed three more times in Romania. Now that the former world champion is gearing up for a high-profile bout with ‘The Problem Child,’ Boustati felt it was time to call out Tate and bring attention to a story that to Boustati, just doesn’t make much sense.

“I heard after that he fought three times in Romania against three, like, douchebag people. He was having all these problems with his eye, but after my fight he goes straight to Romania and fights three nobodies to be able to pump up his record for wikipedia so people don’t think he’s a nobody.

Both Andrew Tate and Jake Paul have established massive followings through social media. A bout between the two makes perfect sense given their popularity online, but El Boustati believes this potential match-up is an “influencers match” and not a boxing match.

“Jake is a very very smart person, he knows what he’s doing and how to make his career very big. That’s why it’s the moment to fight Andrew and I give them both credit because it’s a very smart move, they both have unbelievable followings behind them, but don’t see this fight as a boxing match, see it as an influencers match.”

The thing El Boustati takes most issue with is Andrew Tate’s “alpha male” persona. Leading up to their 2016, bout, Tate appeared to be humble and respectful of El Boustati, but now the social media sensation is quick to throw verbal jabs at his former opponent. Boustati believes those actions show Tate is nothing more than a “scared person.”