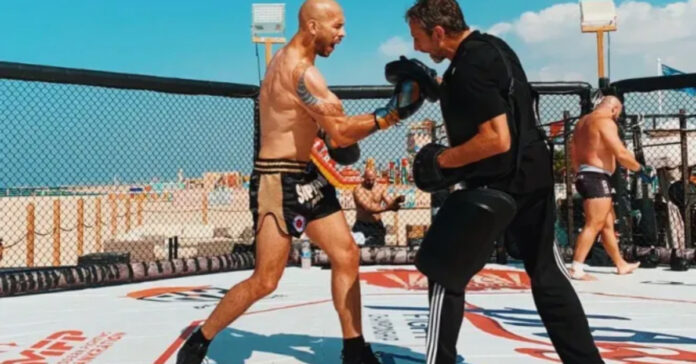 Andrew Tate reportedly broke a UFC middleweight’s ribs with a kick in a sparring session.

Tate has been making his rounds on the internet and has quickly become a sensation, almost overnight seemingly. Tate was also a former professional kickboxer, and sported a very good record of 43-9. Tate also competed in two MMA matches, one amateur and one professional, ending up with a record of 2-0. Both matches came back in 2010.

In his one bout, he beat Luke Barnatt, who would end up fighting in the UFC from 2013-2015. Tate took home the win via unanimous decision and the two would later spar as well, while Barnatt was in the UFC.

Andrew Tate threw a nasty side kick at Barnatt, dropping him to the canvas

Both fighters were sparring hard and before Tate had dropped him with the kick, he also landed a hard hook. The two exchanged a quick glove tap, as it has seemed as if Tate wasn’t trying to hurt his sparring partner.

The sidekick was thunderous, and caused Barnatt to tumble backwards, groaning in pain. It would be reported later that the kick broke a few of Barnatt’s ribs.

Tate’s name has been tossed around as Jake Paul’s next potential boxing match. The two have yet to have preliminary talks, but Tate wouldn’t rule out the possibility. Both Paul and Tate are two huge names on the internet at this time, whether you love or despise them both.

Whether a fight between the two would bring enough eyeballs is another story, as Dana White had claimed that Paul’s last fight was cancelled due to the low gate at MSG.

Would you like to see a fight between Jake Paul and Andrew Tate? Do you listen to Andrew Tate, and if so, what is your take on his personality?