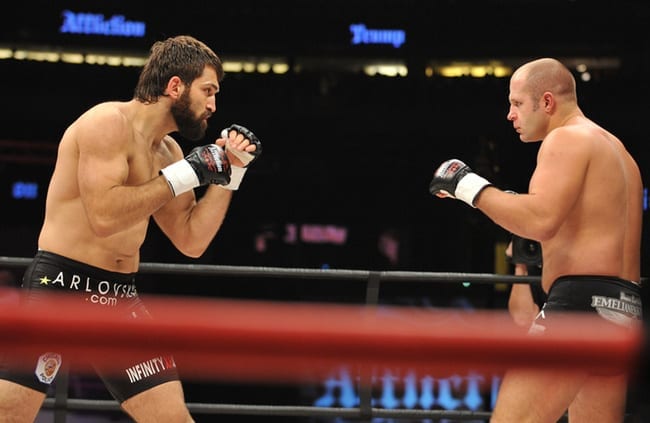 Resurgent former heavyweight champion Andrei Arlovski extended his UFC win streak to four at UFC 191, although it certainly wasn’t his greatest performance. Beating Frank Mir in a somewhat lacklustre decision, ‘The Pitbull’ received some mixed reviews for his fight against fellow former champ Mir, and is now looking to make a quick turnaround after getting cleared to return to training.

Having already stated he wants to fight again this year, Arlovski may be forced to wait until next year due to lack of competition available. Of course there’s always the chance a high profile heavyweight will be forced out due to injury, but that’s never a certainty, and wouldn’t be advisable to wait around for. Talking to our good friends at Submission Radio, Arlovski discusses his future in the division:

“I don’t want to sit too much. The reason why I agreed to the (Frank Mir) fight; first of all, I thought it was supposed to be an interesting fight for the UFC, for fans. And also, top 10, top 15 fighters at Heavyweight right now are usually very tough, they’re very dangerous, and a real man doesn’t sit and pick the fights. Especially, I never picked my opponents. So UFC asked me “do I wanna fight Frank?”. I said “yeah, why not, of course. When?”, they said “September”. I said “sold”. I just wanna stay busy and I wanna fight as soon as possible.”

The question was then posed as to whether Arlovski would be willing to return at UFC 193, and in particular to face old foe Fedor Emelianenko, who knocked the Belarusian striker out cold in 2009:

“Yup, I’m very excited and I promise you it’s gonna be a really good fight. And I will do everything possible to pay him pack by KO. I’m going to knock his ass out.”

“Of course I would love for him to get in the UFC and fight him again to have a rematch. But if you’re asking about if he’s kind of old or not, I don’t think so. Because I think a heavyweight’s prime time is like 36 to like 40 I think. It’s my opinion, I think it’s the best prime time for the fighter. And Also you have a great example, Randy Couture. He fought, I guess till age 47. In boxing you’ve got George Foreman. And I think it’s a good time for heavyweights, good age.”

“No more flying knees and I’m gonna do everything possible to knock him out. It was such a stupid move from my side when I jumped with the flying knee. Idiot.”

It’s a fact that Arlovski was doing very well against Fedor during the opening round of their bout under the Affliction banner, but you could also argue that most of Fedor’s big wins were comebacks. It’s a moot point until they fight again, and ‘The Pitbull’ says he feels a fight with Alistair Overeem might be coming up:

“Well to be honest you, I’m not close friends with Alistair. I was just friends with Travis, and listen, business is business and I kind of have a bad feeling they’re gonna put me against Overeem. So I’m gonna fight him of course. He’s my teammate, but listen, everybody has to make money, everybody has to make decisions. I’m talking about my coaches and how it’s gonna be. So that’s it.”

The UFC heavyweight division is alive with old school Pride FC legends and fan favorites, and to throw Emelianenko in to the mix would simply be awesome. Failing that, potential bouts with ‘The Demolition Man’ or maybe even Junior dos Santos could be exciting.

With Fabricio Werdum currently at the head of the division, it’s going to be interesting to see if he gets knocked off his perch by a fellow Pride FC veteran, or perhaps his former opponent Fedor. That said, Cain Velasquez could potentially be champion if/when ‘The Last Emperor’ signs to the Zuffa family.

Skip to page two to see the Fedor vs Arlovski knockout….