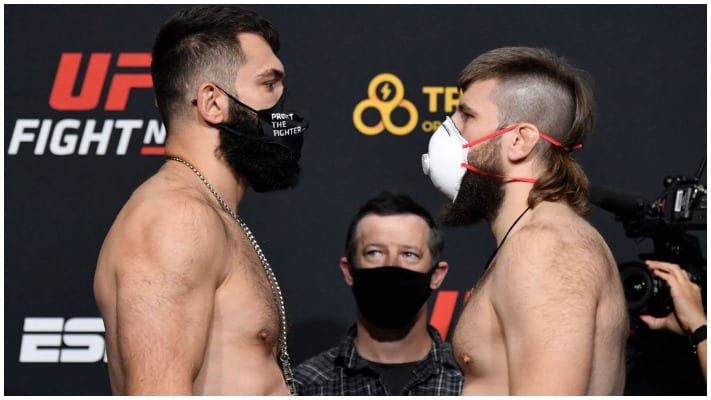 In the UFC Vegas 13 co-main event we have a crossroads fight in the heavyweight division. MMA legend Andrei Arlovski is looking to make it two wins on the bounce. The 41-year-old will need to get by surging contender Tanner Boser who will be hoping to stretch his own winning run to three. Who’ll get the victory? Let’s find out…

Round 1: A really tentative start from both men. As the first minute closes out Tanner Boser throws a low leg kick which is nicely checked by Andrei Arlovski. Boser continues to go low with his kicks. Arlovski comes over the top with a nice counter. He goes high with a kick that is blocked by Boser who tries one of his own moments later. He then lands a nice overhand left – the most significant strike of the fight. Not a lot is happening. Both men are waiting for the other to go first. A real kick heavy first round. Boser has probably been more effective with his low kicks but nothing really for either fighter to brag about. As the final seconds tick down Arlovski scores with a huge punch before the horn sounds.

Round 2: Arlovski and Boser trade low kicks at the start of round two. More than 90 seconds into the second stanza and it’s still all low leg kicks. Arlovski goes high with a tricky kick. Boser tries one of his own but it doesn’t quite hit the mark. The pair clash and it appears the veteran got the better of the exchange. Arlovski follows it up with a straight right down the pipe. Boser is a bit more energetic now but he’s not really getting off with anything. He eats a heavy inside leg kick from Arlovski. Boser swings wildly over the top, misses and Arlovski tries to make him pay up the middle but seems to miss too. The final 10 seconds burst to life. Boser scores a nice body shot but he’s counters well. The 41-year-old tries a spinning attack as round two comes to a close.

Round 3: This fight is on the line right now and both men seem to recognize that. A much better pace at the start of round three. Boser is pressing forward. He continues with the leg attacks but is doing a better job of mixing in his strikes up top. Arlovski doesn’t like it and tries to regain the forward momentum but its stopped by a spinning back-fist from his opponent. Boser touches him with a hook round the guard of the former champ. Arlovski swarms forward. He follows it up with a big shot over the top. Boser is still rattling off those leg kicks on a badly bruised leg of Arlovski. The legend steams forward again to land some big shots. This fight is going to the judges.