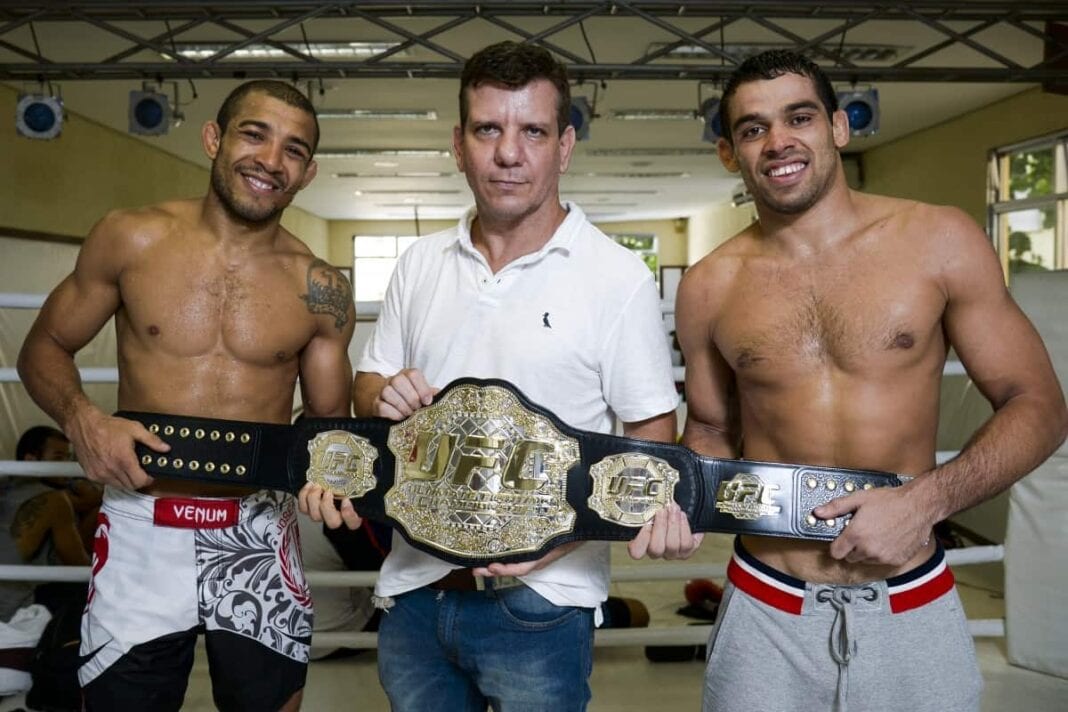 Starting off with the current champion in Aldo, “Scarface” was set to take on now interim featherweight champion Conor McGregor at UFC 189 in one of the biggest fights of the year, but he was forced out due to a rib injury. There was a ton of controversy surrounding the injury, and as a result, both Aldo and his camp received a ton of backlash.

Soon after, Barao attempted to get his belt back from the man who stole it from him in TJ Dillashaw at UFC on FOX 16 last weekend (July 25, 2015), but he was battered and beaten once again.

Speaking with MMAJunkie, Pederneiras stated that Aldo’s injury doesn’t change anything, and that although Barao’s loss is part of the sport, the coach doesn’t believe too much needs to be changed inside of the camp:

“Aldo’s delay changes nothing for us,” he said. “We were already on the right path. Barao’s loss is part of the sport. We have to assess where the errors happened and correct them. But I don’t think we’re on the wrong road, considering our mostly positive results.

“Of course, there’s always something we could learn or improve upon. But we don’t think that too much should be changed.”

Talking specifically on Aldo, Pedernieras believes that his champion will be ready to go by December. The fight with McGregor is still bound to be gigantic, and there have even been talks about the fight going down at the plus 100,000 seat AT&T Stadium, something that Aldo’s team would be happy with:

“We believe that if the bout happens in December, (Aldo will) be ready to fight,” Pederneiras said. “We haven’t had a formal conversation about it. But if it happens at the AT&T Stadium, we would find that wonderful. There’s a chance we could beat the UFC attendance record. To fight at that stadium, we would love it.”

Jumping back to Barao, it seems as if “The Baron” and Aldo could be competing in the same weight class sometime soon, as many have called for Barao to move up to 145-pounds due to the grueling weight cut it takes for him to make it down to bantamweight.

However, according to Pederneiras, that decision hasn’t been made yet, but a discussion will happen:

“For now, we haven’t talked about whether he stays at this weight, or goes up,” Pederneiras said. “We’ll have that talk next week.”

Speaking on Barao’s performance, the coach stated that the former champion didn’t perform up to his potential, but Pederneiras was pleased that Barao didn’t give up:

“I feel Barao fought at a level way below his potential,” he said. “He wasn’t able to perform in the way we saw during training. One positive would be that, even though Barao was very tired, he never gave up, not for a second. I think that was the biggest positive.”

How do you see Aldo vs. McGregor playing out, and should Barao test the waters at featherweight?