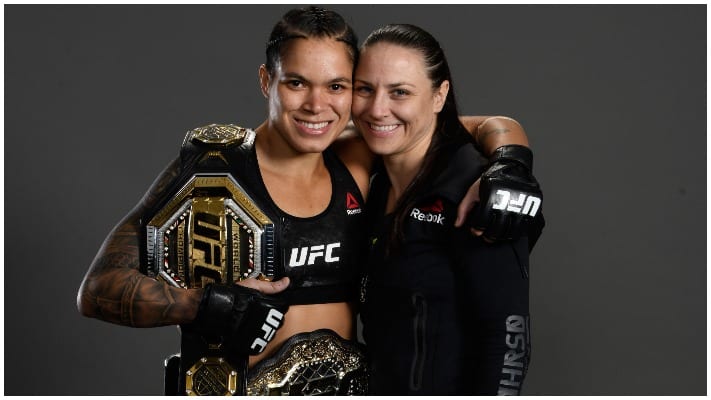 Dual-weight UFC champion Amanda Nunes became a mother for the first time earlier today. The Brazilian knockout artist was alongside her partner, fellow UFC bantamweight Nina Ansaroff as she gave birth to a baby girl.

Nunes took to social media to announce the news alongside a picture of herself, Ansaroff and their newborn – check it out.

Nunes has established herself as the best female fighter in MMA history during a six-year, 11-fight winning streak that dates back nearly six years. ‘The Lioness’ picked up the bantamweight belt at UFC 200 in 2016 and has since defended it five times. Nunes later became a two-division champion by taking out Cris ‘Cyborg’ Santos inside one round.

The 32-year-old hinted at retirement before booking a fight against top featherweight contender Megan Anderson at UFC 256 on December 12.

Nunes and Ansaroff have been planning a baby for a long time. Speaking on ESPN’s Be Honest with Cari Champion back in 2017, Ansaroff revealed she would carry the child before returning to competition, she said. “I can pause. Get a baby and then come back. A lot of girls in the UFC already have a baby. There’s a bunch of girls that have babies and go back”.

Coming off a loss to Tatiana Suarez, Ansaroff is currently ranked number 5 in the women’s strawweight division. As of right now, it is unknown if she still plans to come back or exactly when that might be.

Everyone at LowKickMMA sends our congratulations to Amanda Nunes and Nina Ansaroff on the birth of their daughter.