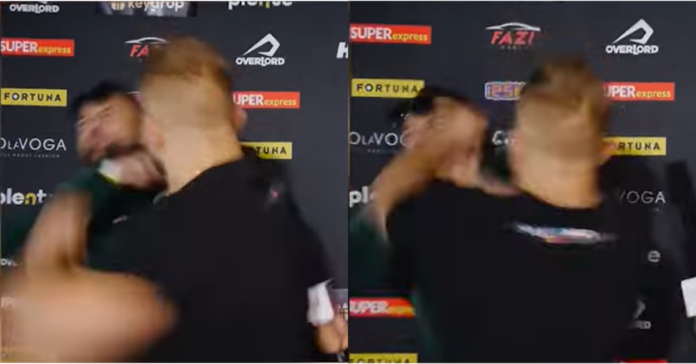 Amadeusz Roslik punched out a YouTuber who has been critical of him. Sadek was doing an interview with MMA journalist Monika Laskowska when ‘Ferrari’ stepped up, landed a hard shot, and walked away. Sadek fell back crumpling much of the set. The YouTuber then stood up and planned to continue the interview while bleeding.

The entire interaction can be seen below:

‘Ferrari’ Amadeusz Roslik is a Polish-born MMA fighter with a 3-3 record plus professional boxing and kickboxing experience. Most of his fights were in Fame MMA but is booked to make his debut in High League on September 17.

Reports suggest that the YouTuber was a vocal critic of Roslik and so the Polish-born MMA fighter took matters into his own hands, literally. he attacked Sadek and left him bleeding during an interview. MMA.PL reports:

“Sadek has been a great critic of Ferrari lately. He, on the other hand, knows very well who the character who appeared at the 2nd press conference before High League 4 is. Effect? Ferrari knocked out Sadek with one powerful shot, and he fell to the promotional wall.”

‘Ferrari’ Amadeusz Roslik and fighting outside the cage

This is not the first time that ‘Ferrari’ Amadeusz Roslik has been involved with altercations outside the cage. Earlier in March of this year, the Polish fighter was involved with getting in a fistfight during a pre-fight interview. He was slapped by his opponent and responded with a flurry of punches.

This interaction can be seen below:

The Polish fighter also has a 2020 loss on his record due to disqualification. Roslik had knocked his opponent out and then followed up with an illegal soccer kick to the unconscious and grounded fighter.

This disqualification can be seen below: