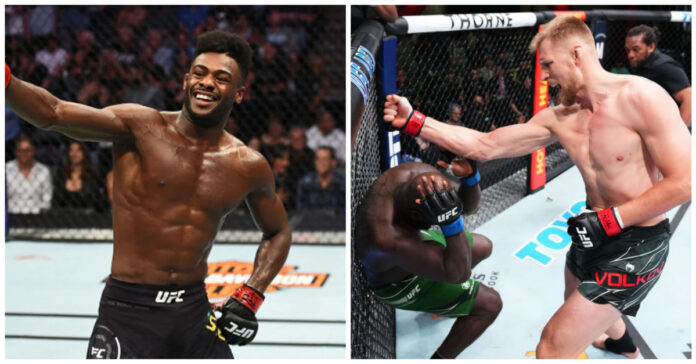 Reigning UFC bantamweight champion, Aljamain Sterling, weighs in on this past weekend’s main event and its controversial ending.

Saturday night saw a heavyweight clash between Alexander Volkov and Jairzinho Rozenstruik at UFC Vegas 56. The fight lived up to many beliefs that it would not go the allotted 25 minutes, in fact, the fight wouldn’t even get out of the first round.

Early on in the contest, it was obvious that Volkov was attempting to chop the tree down, finding great success early with the low kick, to which he would add the right hand which began to land. During a chaotic flurry in the Octagon, Volkov would successfully evade Rozenstruik’s power shots and would land his own right hand, wobbling the Surinamese fighter.

Rozenstruik would then back up to the fence while the Russian began to unleash on him, sending ‘Bigi Boi’s mouthpiece flying in the process. With Rozenstruik visibly hurt, referee, Herb Dean, would call the action, but Rozenstruik would recover quickly, making the stoppage look premature which led to many criticizing Dean’s decision.

On the latest episode of his podcast, Aljamain Sterling, shares his thoughts on the stoppage, coming to the defense of Herb Dean.

“As long as it lasted this fight was fun, Rozenstruik had his moments, got caught with a right hand then got caught with the uppercut against the cage. It felt like from the way I was watching that he went limp twice and when you do that, even when you’re standing u and you go like- it looks like the fight is over because it looks like there is a big disconnect between the brain and the body.”

Sterling would also admit, that while Rozenstruik recovered quickly, it would not have ended badly for Rozenstruik if Dean had let it continue.

“There’s a very fine line between the ref letting you live to fight another day and letting you get punished to the point you probably won’t be able to fight for another day. I think the ref made a good judgemental move.”

What did you think of Herb Deans Stoppage, do you agree with Aljamian Sterling?