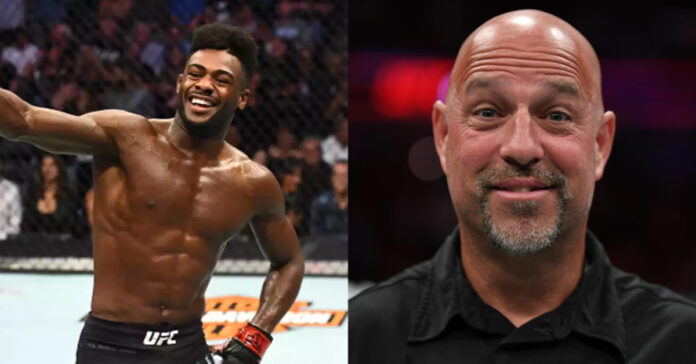 Aljamain Sterling has voiced his displeasure for Dan Miragliotta‘s “smirk” he has when he referees.

Miragliotta is one of the best referee in the sport, but Sterling has a problem with how he carries himself in the octagon. Miragliotta has refereed so many great fights, but has had some moments when fans has questioned his choices as well. Most notably after the second fight between Kamaru Usman and Colby Covington. The two embraced after months of trash talking each other, but Miragliotta decided to separate the two fighters during their long hug and conversation.

Miragliotta has never reffed a fight of Sterling, but he still has ill feelings toward Miragliotta.

Aljamain Sterling was talking about the ref in his latest video on his YouTube channel.

“If you look at (Miragliotta), when he’s refereeing he’s always got this, like, smirk that kind of seems, like, I don’t want to say condescending, but it’s almost, like, patronizing. I don’t know, I don’t know. I just feel like that smirk… I just don’t like he always has on this… Like, he’ll stop the fight and he’s kind of like ‘Yeah, buddy you got f****d up.” ) Sterling said on his YouTube video (Transcribed by MMANews)

‘Funk Master’ will be defending his bantamweight title against T.J. Dillashaw in his next fight at UFC 280. This is just Dillashaw’s second fight back since his long layoff, due to a PED suspension. The bout is scheduled to be the co-main event of the evening, in Abu Dhabi. UFC 280 is lined up to be one of the best fight cards we have seen in quite some time. The main card also features Charles Oliveira vs Islam Makhachev, Sean Brady vs Belal Muhammad, Beneil Dariush vs Mateusz Gamrot, and Marina Rodriguez vs Amanda Lemos.

Do you agree with Sterling? Is Miragliotta’s smirk annoying?