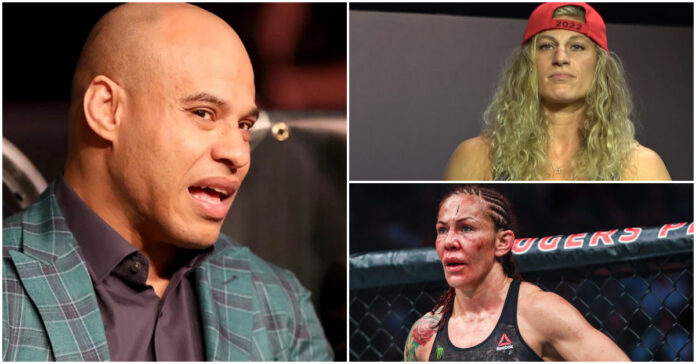 Kayla Harrison’s manager Ali Abdelaziz does not believe a potential showdown against Cris Cyborg is the way to go.

Going undefeated in her professional career, the two-time PFL champion Kayla Harrison has been dominating the competition in the organization. The 31-year-old racked up 13 wins in the PFL and has been touted as the greatest female athlete of all time even though she has not taken her chops outside the promotion.

Current Bellator women’s featherweight titleholder Cris Cyborg is another woman who had worked hard to build an aura of invincibility around her. Cyborg ran through her opponents during her prime and can still hold hers against the very best in female competition in the company.

There have been talks to put the two women together inside the octagon in a cross-promotion bout for their legacy. However, Bellator president Scott Coker has suggested that no official discussions have taken place in regard to the matter. With Cyborg set to become a free agent this July, PFL will have an opportunity to work towards the super fight and make her an offer.

Ali Abdelaziz, head of Dominance MMA, and manager for Kayla Harrison is not too keen on the idea and believes Cyborg is trying to mooch off of Harrison’s brand.

“And even if this fight happens, nobody gives a sh*t. That’s my opinion. Because Kayla’s Kayla. She’s undefeated. She’s the best female fighter in the world, and in my opinion a pound-for-pound great right now. She doesn’t need to prove anything to anybody. Cyborg needs her. She doesn’t need Cyborg. She’s making six figures, seven figures every fight. She’s happy. She’s going to beat whoever they give her.” (h/t MMA Junkie)

Ali Abdelaziz has not outright shut down the possibility of Harrison participating in a big fight. While he acknowledged the allure of such an idea, he reiterated his conviction that the opponent needs to be a big draw as well to benefit Harrison.

According to Abdelaziz, Cyborg is not a needle-mover and he would much rather prefer someone like Amanda Nunes. He made sure to let everyone know that it’s not the danger in facing an opponent like Cyborg but the business value of it that influences his decision for Harrison.

“If you talk about maybe one day Amanda Nunes or something like that, yeah, Amanda Nunes is interesting. Let’s do it,” Abdelaziz said. “But I don’t really care about Cyborg. I don’t think people will buy this fight.

“Anybody can come. They’re going to get their ass whooped regardless. It can be Amanda, Cyborg. Anybody. Julianna (Peña). Anybody can get it. They can all get it. Just don’t use Kayla’s name to promote your brand.”