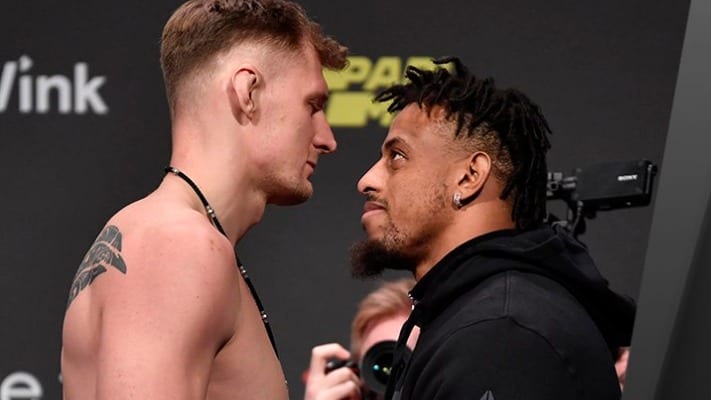 In the co-main event of UFC Moscow, Greg Hardy and Alexander Volkov meet at heavyweight.

Hardy jumps forward but doesn’t land. Volkov lands a nice right hand on Hardy as he circles away. Hardy with two big lead left hooks. The round comes to an end.

Hardy says in between rounds that his right hand is injured. Hardy fakes a takedown and throws the overhand that just misses. Volkov really attacking the lead leg of Hardy. A big kick to the body lands for Volkov. A nice jab from Volkov but Hardy also lands a nice overhand at the same time.

Hardy comes in blitzing but doesn’t connect on anything clean. Hard jab from Hardy. Volkov sneaks in a nice right hand. Volkov with another good jab. Another big leg kick from Volkov. A head kick connects for Volkov and Hardy responds with a jab.

Volkov putting together some nice shots backing up. Another head kick lands flush for Volkov. A hard kick to the body connects for Volkov. Head kick from Volkov connects again. The fight comes to an end.