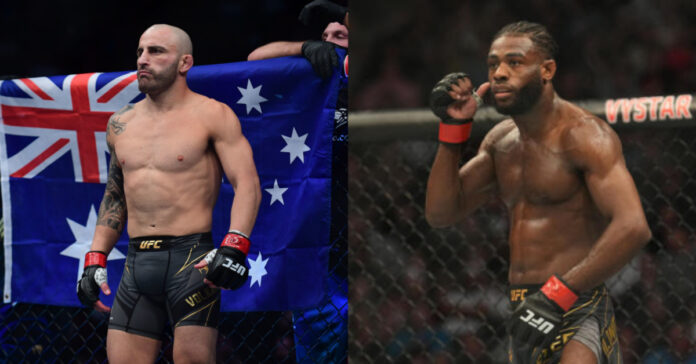 Reigning featherweight champion, Alexander Volkansovski has responded to Aljamain Sterling’s claims that he would ‘easily’ take down and submit Volkanovski.

In the co-main event of UFC 276, combat sports fans witnessed Alexander Volkansovski further cement his legacy as one of the greatest featherweights of all time. ‘The Great’ would take on and defeat the former champion, Max Holloway, for a third time, simultaneously making his fourth title defense.

Alexander Volkanovski has now expressed intentions of moving up to lightweight, hoping to face Charles Oliveira, who was recently stripped of the 155lb belt, for the vacant title.

Although Volkanovski is chasing greatness in the weight above, the champion in the weight class below him feels he can do the same. Bantamweight champion, Aljamian Sterling, feels that he has the skills to finish Volkanovski if they were to meet in the octagon.

During his UFC 276 post-fight press conference, Volkanavski was asked what he thought of Sterling’s comments.

“Aljamain said that? Let him talk, it’s alright,” the Australian said. “He’s got his own division to hold on. Credit to him to fight someone like Petr Yan and get the win, but settle down.”

With his recent win, Volkanovski finds himself in a position where there are no obvious contenders for his title. Holloway was the clear second-best in this position as during the time between the second and third fight he would comfortably beat both Yair Rodriguez and Calvin Kattar.

Volkansovski also found success in this period successfully fending off two more contenders in Brian Ortega and Yair Rodriguez. Admittedly, No.4 ranked Josh Emmett has complied a solid five-fight winning streak, capping it off with a recent win over Calvin Kattar. However, the idea of this matchup has picked up little steam in terms of fan interest.

Although this does leave an opening for Sterling to potentially move up, there is still plenty of work for Sterling to do at bantamweight. Former champion TJ Dillashaw made a successful return after a PED suspension and the Petr Yan chapter of Sterling’s life doesn’t seem to be over.

Would you like to see Alexander Volkansovski take on Aljamian Sterling?