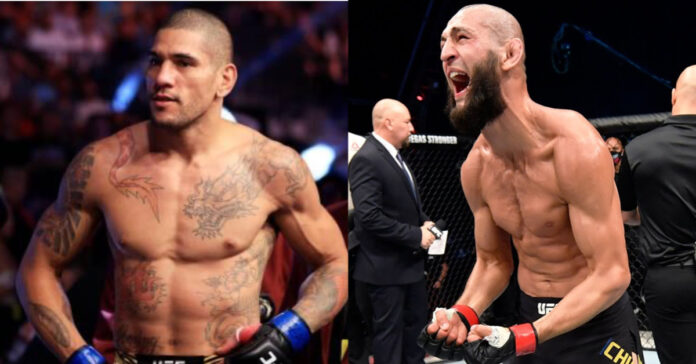 Pereira has been taking the UFC by storm, much like Chimaev has done. Pereira recently starched Sean Strickland, who was thought to be another fighter on pace to fight for the title. He is 3-0 in the UFC, and has two wins by a devastating knock out. He won a ‘Performance of the Night’ for both of those fights. His other bout he won by unanimous decision, when he out struck Bruno Silva in three rounds. Silva is a fantastic striker, and won all three of his UFC fights by KO/TKO, prior to his bout with Pereira.

With his recent rise in the rankings, Chimaev took aim at Pereira. Chimaev has won fights in both the Welterweight and Middleweight division in the UFC, but he will most likely fight the winner of Kamaru Usman vs Leon Edwards, if all things go his way against Nate Diaz.

Alex Pereira wasn’t very happy with Chimaev Calling him out

“These guys wanna make a name for themselves [by talking],” Pereira said. “If I wasn’t going to fight for the belt already and he said something like that, hats off to him. But the way he’s doing it, he’s a coward. He’s a coward seeking attention.” (Transcribed by MMAFighting)

Pereira went on to say that Dana White promised him a fight with Israel Adesanya for the Middleweight championship. He claims that Chimaev is trying to call out people he knows he won’t fight, just to gain the attention from the masses.

“Look at this guy,” Pereira said of Chimaev’s tweet. “I’m going to fight for the belt, it’s guaranteed. He wants to attention. ‘Oh, I wanna fight this guy.’ He knows I’m the next contender and he still says something like that. I’d like to see [what he would do] if Dana White came out and said, ‘Alex, your shot at Adesanya is guaranteed but he wants some time to prepare, so fight this guy first because he wants to fight you. Your title shot is still guaranteed.’ Let’s see what he would say.”

Would you like to see Chimaev vs Pereira go at it?