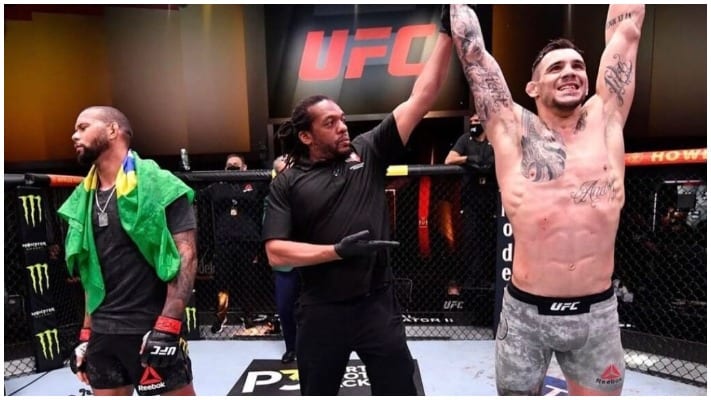 Rakic and Santos squared off on the UFC 259 main card last month.

The fight was eagerly anticipated by many but failed to live up to expectations.

Neither, Rakic or Santos particularly impressed during the fairly uneventful three-round bout.

Ultimately, Rakic picked up a unanimous decision victory and moved himself one step closer to a shot at UFC gold.

“I was training for that but he didn’t come out like usual,” Rakic said. “I think I neutralized his strength with my distance and the constant pressure forward, I didn’t let him do his own thing. I picked my shots and that was enough to win the fight. If he came forward more or [was] more aggressive, the fight would be going different, you know, and I would probably knock him out or take him down and submit him. But he didn’t rush so many times forward and I picked my shots. I didn’t expect such a passive Thiago Santos but, anyways, a victory is a victory and I’m the No. 2 lightweight contender for a reason.”

“The focus was on an aggressive guy,” he continued. “I respect Thiago and I think you can respect your opponent before the fight and after the fight, but, in the cage or in the octagon, I’m not gonna respect you. And I think his problem was that maybe he was respecting me in the cage. That’s the reason he let me do my thing. It was for me, like, easy victory, because I showed maybe 60 percent of my skills.

Santos got wind of the comments from Rakic and was not happy.

“Hey @rakic_ufc Easy fight because I did not KO your ass! I understand that when that doesn’t happen it is already a victory for my opponents!”

Thiago Santos followed that up with some stats from the fight.

“Hey @rakic_ufc Why the disrespect? What do you mean easy fight? All the specialized sites gave me the strike count,” Santos wrote on Twitter. “All you did was grab and stall! You have a short memory!”

Do you think Aleksandar Rakic was disrespecting Thiago Santos by calling their fight easy?