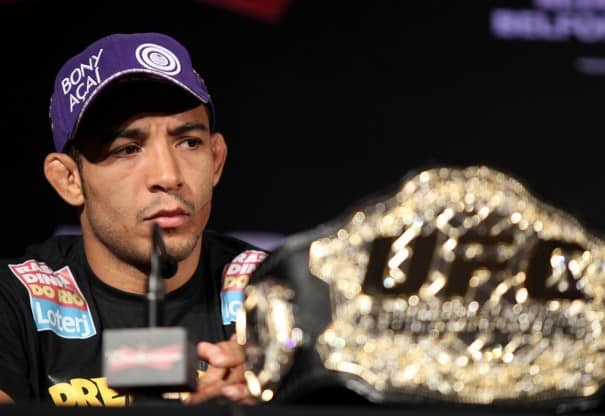 We finally have a date for one of the biggest grudge matches in the history of the UFC, as reigning featherweight king Jose Aldo will put his title on the line against interim champion Conor McGregor at UFC 194 in December.

The fight was supposed to go down at UFC 189 on July 11, 2015, but Aldo was forced to pull out due to injury, only increasing the magnitude of the rivalry. McGregor then went on to knockout No. 1-ranked Chad “Money” Mendes in the second round at UFC 189 to become the interim champ.

Aldo’s last fight was also against Mendes, as the two battled back and forth in a five-round war last October. However, “Scarface” isn’t looking for a war with McGregor, he plans to finish the Irish sensation quickly:

“As fast as possible, so no one suffers, including me, and we can come back home quickly to eat and celebrate,” Aldo said during a Q&A session on Combate’s Facebook page. “My last fight was a war, but we’ll suffer way less this time.”

However, at the end of the day, Aldo doesn’t care how the fight plays out. The only undisputed featherweight champion in the UFC’s history only cares about being just that, and retaining his title:

“It doesn’t matter if I’m going in there and finishing his quickly, if I’m punching him once and he goes down,” he said. “The important is that I’ll come out victorious, it doesn’t matter what I’m going to do in there.”

As far as his injury goes, Aldo said that he’s slowly started to get back into training, and of course he has time, as we are still months out from the fight. “Scarface” continued on, saying that as the fight nears closer he will ramp up his camp:

“We still have four months, so we’re slowly starting (my camp),” said the champion. “When we’re nine weeks away (from the fight), we’ll work harder and more focused on the fight. For now, be cool, I’m slowly coming back to training.”

Who will walk away from UFC 194 as the undisputed king of the 145-pound division?