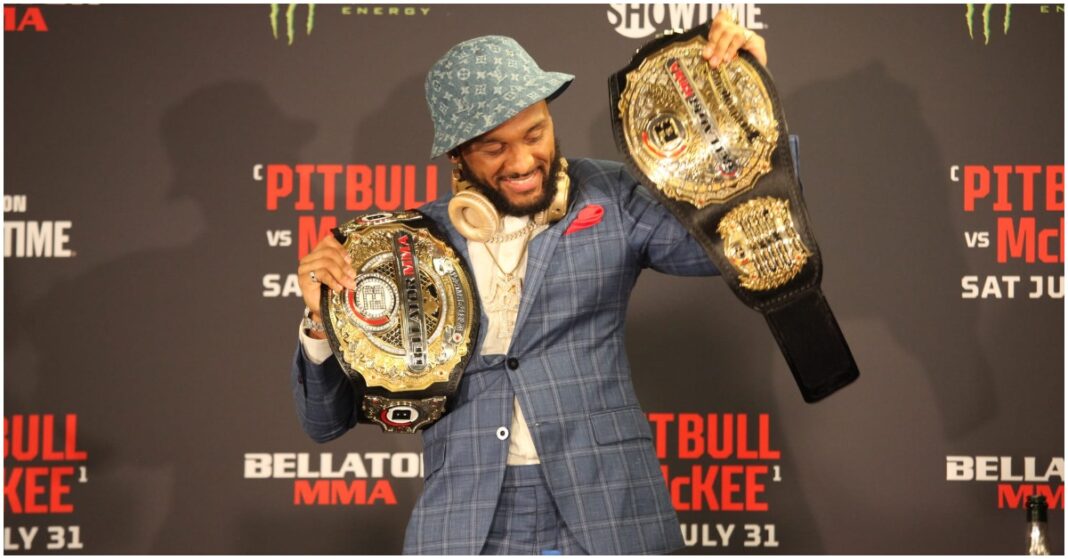 Bellator champion AJ McKee has revealed his ‘dream’ of making the move over to the UFC and testing himself against the highest level of competition out there.

Ahead of McKee’s rematch with Patricio Pitbull this Saturday it was revealed AJ McKee would be leaving his profile management team over at CAA to have his father, Antonio McKee, and himself handle his representation.

Currently sitting at 18-0 McKee is one of the most sought-after fighters in the sport and has now revealed he will only continue with Bellator if they make it worth his while financially.

Speaking to MMA Fighting AJ McKee revealed it’s nothing but $1 Million purses moving forward for him given what he has achieved in the sport.

“They did [try to re-sign me] I had already fought previously for a million dollars. I feel I should never have to see anything under a million dollars again, especially with the achievements I’ve accomplished. Every time I step in that cage, there’s an ‘O’ on my record.

“For me to go backwards, anything under a million, I feel it’s just not reasonable. We were at like [$500K] but it’s not appetizing to me.”

McKee secured himself a $1 Million prize after he emerged victorious from the Bellator featherweight Grand Prix in 2021. AJ McKee revealed his current contract purse is set to $250,000 and says if Bellator is unable to match the asking price he will test free agency.

“Possibly, if we can’t come up with the million dollars, then yeah [this could be it],” McKee said.

“Also that’s the thing. Every time I fight, my numbers are going to double because I want to be back paid for the fights that I haven’t. It’s business. I’ve got families to feed.

“There’s been nothing re-signed so currently championship clause, three fights [remaining],” McKee said. “It doesn’t specify specifically [how long the contract lasts] so it’s normally about six months per fight, a year and a half [left]. A year and a half but I’ve got other things going on outside of that, all kinds of other stuff.”

If McKee’s time with Bellator is ending, the undefeated fighter has already revealed what he would like to achieve if he does move on from the promotion.

“Owning a UFC belt one day, it’s going to happen. It’s inevitable,” he said. “It’s an achievement and an accolade that I would love to have under my belt. Being champ-champ there as well.

“Beat [Alexander] Volkanovski up real quick one time,” he said. “but my dream fight’s [Max] Holloway. That’s the dream fight.” (Transcribed by BloodyElbow)

It will be interesting to see where McKee ends up, UFC featherweight champion Alexander Volkanovski has already welcomed the opportunity to ‘school’ McKee if he does join the UFC roster.

What promotion do you think AJ McKee will sign too?