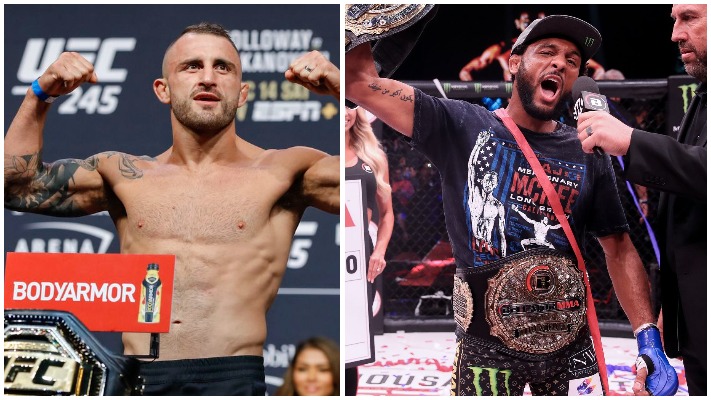 Alexander Volkanovski wants to remind AJ McKee that there are levels to MMA.

At the Bellator 263 post-fight press conference, McKee confidently declared himself the best featherweight fighter in MMA, he said.

“I am the best 145-pounder in the world whether it’s UFC, ONE FC, PFL, I don’t care who it is. I’ve got $1 million cash in my bank and I’d put it up against anybody else. I’m sure Showtime and Bellator, they’ll match it. Let’s do some superfights. Let’s get some big stuff going. Let’s change this sport, like I’ve been saying. Let’s do it. Let’s unify these belts.”

“For him to even get that opportunity to fight the UFC champion just obviously wouldn’t be fair,” Volkanovski told MMA Junkie. “Look at the row of killers that I had to verse to get to the top, to get to the champ. The same as the guys that are in the top 10, absolute killers in the UFC, and they got to fight each other to try and get to the top. No offense, but the competition, you got to be honest, it is a little bit different.

“Is he high level? Maybe,” Volkanovski added. “But you get to fight these guys and then get a shot straight to the top? Yeah, I wish I was in another promotion before I was in the UFC and got a shot at the UFC champ, but that’s not how things work. But again, fair play to him. I ended up seeing highlights of the fight. He looked good, did great, but at the same time, this is a whole different ball game.”

Who do you think is the best featherweight in MMA? Alexander Volkanovski, AJ McKee or somebody else?