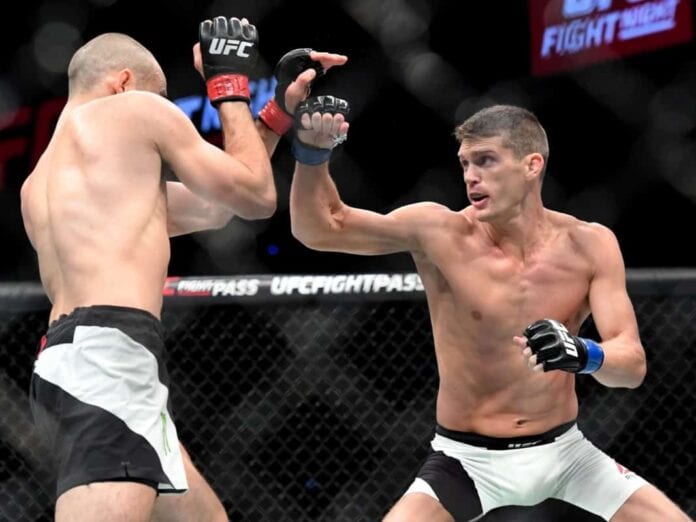 Rising UFC welterweight Stephen Thompson picked up by far the biggest victory of his MMA career when he outlasted Rory MacDonald in the main event of last night’s (Sat., June 18, 2016) UFC Fight Night 89 from the TD Place Arena in Ottawa, Ontario, Canada, but now he’s understandably got his sights set on a bigger prize.

After the huge win over “The Red King,” Thompson wasted no time in stating his desire for a title shot against the winner of the Robbie Lawler vs. Tyron Woodley title bout at UFC 201 on July 30. “Wonderboy” wants the winner of that fight no matter who it is. But speaking to FOX Sports after the fight, he admitted that if he had to choose, he’d pick Lawler because he believes they could put on a great show for fans:

“I think definitely me and Robbie Lawler would definitely put on a better show. I mean Tyron Woodley, he is an explosive guy, he is a wrestler, but I think people want to see a striking war. People want to see somebody get knocked out. I’m not saying Tyron can’t do that, but I figure fighting him, he’d be shooting more towards the legs trying to get me down. So, Robbie Lawler.”

Further discussing his proposed match-up with the exciting Lawler, “Wonderboy” first gave “Ruthless” props for his otherworldly left hand and ability to seemingly get stronger as the bout wears on. But he also noted Lawler likes to stand right in front of his opponent, which is something he likes as a deadly striker:

“Man, he’s got a mean left hand. I mean, as you saw against, when he fought Rory MacDonald – broke his nose, just kept landing it over and over again. He is the type of guy he gets stronger as the fight goes on, so I gotta be in the best shape of my life if I step in there and fight against Robbie Lawler. But you know what? He does stand there in front of you; I like guys that stand there in front of me. I use my movement, use my kicks, switching sides, try to frustrate him a little bit.”

With literally nothing left to do in order to get a title shot after back-to-back wins over the No. 1 and No. 2 fighters, Thompson again spoke up about his preference at the post-fight press conference, adding that he thinks Lawler will be the victor because Woodley has been inactive and slows down as the fight extends into later rounds:

“I would rather fight Robbie Lawler, and I think Robbie Lawler is going to win it,” Thompson said at the post-fight press conference. “He’s stayed active. Tyron Woodley hasn’t. Maybe there is a little bit of cage rust in there. Tyron’s been known to slow down later on in the rounds, and Robbie Lawler, he gets stronger as the rounds go on. So, I see Robbie Lawler winning that fight and I would love to fight him, hopefully in New York City.”