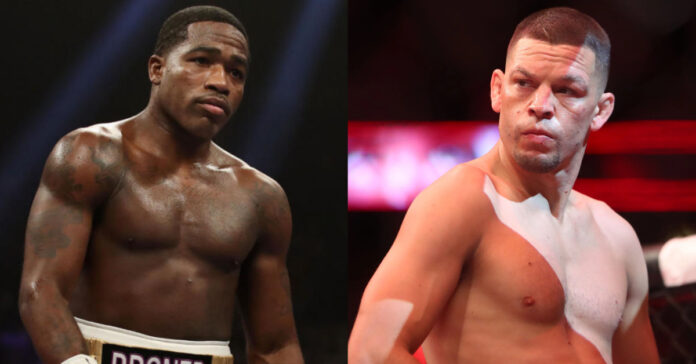 After his final appearance inside the Octagon at UFC 279, Nate Diaz indicated that he will be moving on to other sports. Many speculate that The Ultimate Fighter alumni will try his hand inside the squared circle. As a result, everyone is showing interest in a big money fight with Diaz, including accomplished pugilist Adrien Broner who called out Diaz on Instagram.

At one point, Adrien Broner was ranked as Ring magazine’s fifth-best pound-for-pound professional boxer in the world. Unfortunately, a heap of legal issues outside of the boxing ring have diminished his legacy and activity.

Adrien Broner has only competed a handful of times in recent years as ‘The Problem’ has lived up to his nickname outside of the ring. In 2016, he was charged with misdemeanor battery after allegedly choking a waitress at a Las Vegas nightclub. Less than a year later, TMZ obtained footage of Broner appearing to physically assault a heckler. Broner was taking pictures with fans in Las Vegas when one of them began to heckle the former world champion. Agitated, Broner struck the man, knocking them out in the process.

Broner also has a disturbing history of sexual assault. In February 2018, he was charged with misdemeanor sexual battery in Atlanta. Months later he was accused of sexually assaulting a woman in a Cleveland nightclub. The court ordered him to pay more than $800,000 to the victim in 2019.

Fallen from grace and nearly two years removed from his last fight, Adrien Broner may be looking for one big final payday. A match with Nate Diaz could be just that, but with everyone seemingly vying for a meeting with the ‘Stockton Samurai’ it’s unlikely Adrien Broner was ever on Diaz’s shortlist of potential opponents.