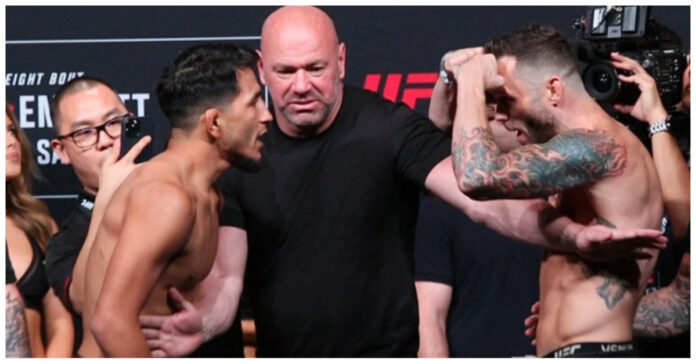 Adrian Yanez picked up arguably the most emphatic and impressive win of his career so far last night.

Adrian Yanez faced off against fellow bantamweight contender Tony Kelley, whom he violently knocked out with a flurry of heavy strikes in the first round. The knockout capped off an intense build-up to the fight, with Kelley coming under fire on his own for some highly controversial comments made about Brazil in the recent past at UFC Vegas 54. Yanez was the man touted by many, both fighters and fans alike, as the man to punish Kelley for said comments, and this he most certainly did.

In the post-fight press conference, Adrian Yanez was on fine form and had a lot to say, specifically about some very particular comments that Kelley made in the build-up to the fight itself. Yanez said:

“Yeah, you know, he started to talk a bunch of s*** and uh, I felt I kept everything pretty cordial…then he starts calling me a Wish version of Masvidal, and I know he kind of wishes he didn’t say that.”

The sentiment was echoed by large echelons of the social media world, with UFC welterweight Gilbert “Durinho” Burns even asking for Yanez’s financial details in order to financially compensate him for such a conclusive end to their fight.

With this result, and with such a performance in a night of spectacular finishes, Yanez further cements himself on the path towards bantamweight superstardom, with many in both the media and wider MMA fandom calling for a future fight with fellow bantamweight star “Suga” Sean O’Malley. O’Malley is presently scheduled to face Pedro Munhoz at UFC 276 on July 3rd. Should O’Malley win, it is highly possible that we will see these two stars of the bantamweight division finally face off.

What did you think of Adrian Yanez’s impressive display?