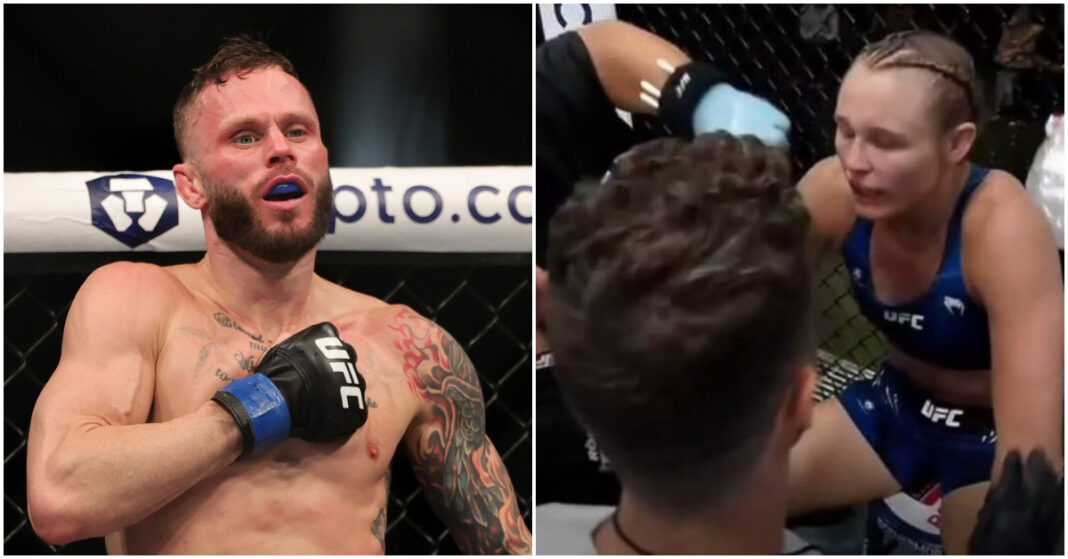 UFC bantamweight Tony Kelley has come under fire for his recent corner work for Andrea Lee at UFC Vegas 54.

Last night, Tony Kelley was working in the corner of Andrea Lee in her clash with Viviane Araujo. Kicking the event off in the featured prelims, Araujo managed to secure a victory over Lee via unanimous decision.

It wasn’t her performance that got most people talking. On a night full of exciting fights, one of the biggest talking points was Kelley’s racist remarks during Lee’s fight.

Kelley shared some not so wise words of encouragement to pump up Lee for the next round.

As expected, members of the MMA community were not pleased with the derogatory remarks made by Kelley. Brazilian fighters took to Twitter to express their disapproval along with Kelley’s next opponent Adrian Yanez.

Tony Kelley responds to the backlash

Following the criticism he faced for his comments, Tony Kelley has now responded to the backlash he received after the event. Kelley seems to be content with his behavior and feels what he said to be okay.

He opened up on what he was talking about when he said “dirty f**king Brazilians” as he referenced a “dirty eye poke”. Taking to Twitter to share his thoughts, Kelley defended his statements.

“Cancel Culture is real. What I said was real and in the heat of battle, and in no way had any type of racist connotations meant…but if that’s the way you take it, idgaf. So many people quick to say racist..that shits getting so old. My reference was to a dirty eye poke.”

Lee has received her end of the criticism as well for her dating choices. In the past, Lee was rebuked by the community for dating a man with Nazi tattoos who eventually ended up assaulting her. Members were quick to point out her taste in men after Kelley’s pep talk.

Do you think the comments from Tony Kelley were racist?