LowKickMMA.com
Home UFC News A Look At How Paddy The Baddy Won Over Public Opinion 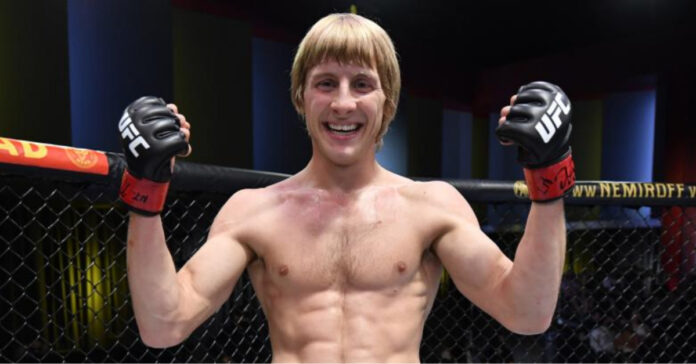 What ultimately draws fans to professional athletes who eventually become their heroes? Is it skill, humility, authenticity, or bravado? Perhaps it’s a combination of factors but Paddy Pimblett’s journey to the apple of the fighting industry’s eye is a curious yet inspiring one. Indeed, the Liverpudlian didn’t do much to lift the needle when he first arrived on the scene in 2021 to make his UFC debut, and, if anything, was seen as an imposter with a bad haircut.

Indeed, Pimblett had a significant amount of doubters despite defeating Brazilian Luigi Vendramini during UFC Fight Night 191 in Las Vegas in September 2021. You would have to say that a lot of this was down to Pimblett’s brash nature and what seemed like misplaced confidence in his own ability following the fight. Essentially, the lasting image fans had of that fight was Pimblett droning on about how “Scousers don’t get knocked out”.

You always felt, however, that the time would come when a more experienced fighter proved Pimblett’s theory wrong about everyone in his hometown having an iron chin. However, there was no guarantee that this time would ever arrive given that lightweight fighter came across as a fly-by-night character who may never be seen in the Octagon ever again. In the event that he should return, then you were sure that the Liverpudlian would get what was coming to him.

As it turns out, Pimblett would return in March 2022 for the UFC London event when he took on Rodrigo Vargas in a lightweight showdown. This time, Pimblett recovered after a bad start to beat the Mexican in the first round courtesy of a slick rear naked choke. The 27-year-old then finished the night by eating a pizza in front of the world’s media as he took questions, only to tell everyone midway through the press conference that he “would rather be fat and happy”.

Following this, there was a sense that Pimblett may not be as obnoxious as first thought but still, this is a fighting game and the jury was still out. However, Jordan Leavitt was next in line to be beaten by Pimblett in July 2022 after the Liverpudlian executed yet another sensational rear naked choke. Pimblett then used his post-fight interview to spread a message of hope to those watching which did a lot to bring the doubters around with regards to his authenticity. All of a sudden, the world could see a man with undeniable skill and the gift of the gab who was, crucially, willing to use it to speak about things that mattered. In essence, Paddy was fast becoming a hero and had a uniqueness to him that no fighter could match.

The takeover continues as Paddy The Baddy got it done once again at The O2 Arena 🔴🔥#UFCLondon pic.twitter.com/K7v8Clvxs3

Yes, there have been comparisons drawn to the flamboyant American Sean O’Malley who is the same age but that may change soon with O’Malley unlikely to win his next fight at UFC 280. At least, Bodog, one of the most exciting sports betting online operators in Canada, has priced Petr Yan at just 2/9 to beat O’Malley. If this were to happen then Pimblett will be out on his own in terms of keeping his winning streak with O’Malley surely set to lose his.

This outcome will undoubtedly make Pimblett the hottest property in the UFC and capable of pulling in the biggest audience numbers. With this in mind, it’s safe to say that public opinion has completely changed with Paddy the Baddy en route to becoming UFC’s biggest star.