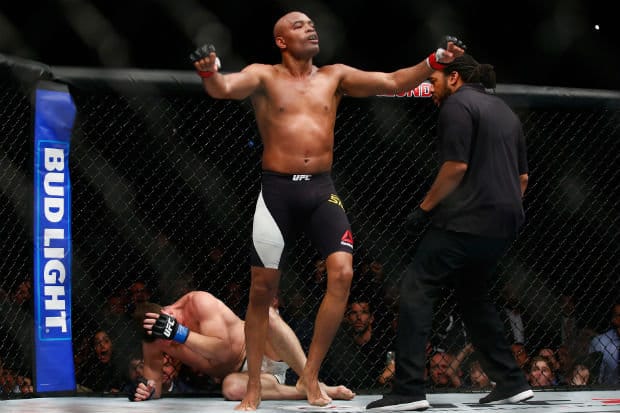 While the fight was extremely entertaining to say the least, it also featured its fair share of controversy.

Perhaps the most controversial moment came at the end of the third round when Silva dropped Bisping with a flying knee as the bell rang. Celebrating as if he had won the fight, “The Spider” was tremendously confused when referee Herb Dean ordered the fight to go on.

UFC President Dana White could only describe it as “madness”:

“Crazy, I mean absolute madness,” White said to Dan Hardy and Jon Anik standing cageside. “The flying knee. Listen, walkoff knockouts are awesome, make sure the fight is over.”

White felt as if Bisping, who had dropped his mouthpiece, had taken his mind off of the action, a clear mistake:

“Mike Bisping was way too concerned about his mouthpiece and started trying to stop the action. Anderson Silva pours it on, he hits him with this knee and boom.””

“If he (Silva) would have jumped on top of him he could have finished the fight. He did not, he tried to walk away,” added White.

While the UFC boss thought “The Spider” should’ve finished the fight, he did, in the end, score it for the Brazilian despite Bisping being awarded the unanimous decision victory:

As far as Bisping goes, “The Count” has now won three straight, putting him dangerously close to the title shot he’s always gunned for but never received. White closed with praising the outspoken Brit, noting that Bisping has never backed down from a fight:

“Bisping has never won a world title but he’s been around here for a very long time and everybody gets excited when Bisping fights because Bisping comes to fight. Bisping never backs down from a fight. He’s in your face from the minute the fight is made until the last bell rings and it’s one of the reasons so many people like to watch his fights and so many people respect him.”


READ MORE:  UFC Veteran Believes That A "Khabib Style" Could Be The Key To Defeating Israel Adesanya