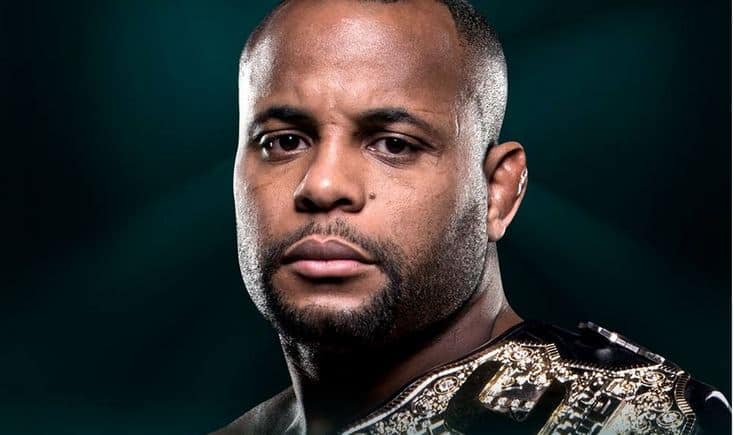 UFC light-heavyweight champion Daniel Cormier is riding the crest of the MMA wave right now; ‘DC’ won the belt at UFC 187 with a third round submission win over Anthony Johnson, taking over from Jon Jones as the champ after ‘Bones’ was stripped of the belt by the promotion. Even after such a dominant win over a dangerous contender such as ‘Rumble’, it seems there are doubters in Cormier’s credibility as the boss.

Having lost a decision to Jon Jones at UFC 182, Cormier has been the subject of much chatter since last Saturday (May 23rd), but he tells The MMA Hour that criticism simply doesn’t bother him:

‘Jon disqualified himself from the competition, there’s nothing we can do about that. I’m proud of what I accomplished the other day. I would love to fight Jon again, and hopefully beat Jon. I’m the UFC champion, they don’t just give away titles, man. In history I will go down as the lineal champion, that’s it.’

It seems that Jon Jones is still ore of a hot topic than Cormier is, even now that he is champion. Perhaps the media has more of a role to play in that than anyone else, although ‘DC’ has an interesting take on it:

‘I still want to fight him. I think that Jon Jones beating me, and then me beating (Anthony) Johnson the way I did, that just shows you how special (Jones) is. I want to compete against him. I hope (Jones) was watching. Can you imagine him sitting there watching me win the title? If the roles were reversed I would be going crazy, he doesn’t want to see me walking around with what he considers his title, which it isn’t anymore.’

‘I will represent this sport in the best light possible, I’m gonna live my life the correct way. I’m going to be an inspiration for kids to look up to.’

‘DC’ certainly has a squeaky clean image in comparison to his title’s predecessor, even after the notorious UFC 178 media day brawl, and he clearly wants to maintain that. That being said, there has to be beef going down in the life of a UFC star, especially if you’re a champion. Cormier then addressed his confrontation with Ryan Bader at the UFC 187 post fight presser:

”Ryan’s learning from the Conor McGregor play book of building a fight up. I understand him wanting a title shot, but by process of elimination he would be next anyway. He didn’t need to come and interrupt the conference and all that, I played no part in that deal, maybe I pissed him off messing with him during the lead up to our (booked) fight. I think they should give ‘Rumble’ Bader, because he was acting as if I had already beaten Johnson before UFC 187, calling me out for the title shot before we’d even fought last weekend. What’s he gonna do? They should feed him to ‘Rumble’ as punishment. The thing is, Ryan Bader has got everyone to talk about him, that’s spectacular. I heard today he was going on a radio show, good for you, you did that off my name. He’s been talking to McGregor. Ryan Bader you’re next bud you are going to get embarrassed.’

Bader’s confrontation with Cormier smells scripted, and truthfully most rivalries in the sport are as such. The fact remains that we appreciate them as they are often quite fun and amusing. This is the start of a new era for the UFC light-heavyweight division, and likely the promotion as a whole. If the new boss is able to get past ‘Darth’ in their almost certain pairing, who would be left to fight?

With Alexander Gustafsson out injured and coming off a loss to Anthony Johnson in January, could the UFC really sell a fight with ‘The Mauler’? There’s also Ovince St-Preux vs Glover Teixeira to make a potential contender, but right now the division is kinda light on legitimate title fights.

After thought-How crazy would it be if Ryan Bader was UFC champion?