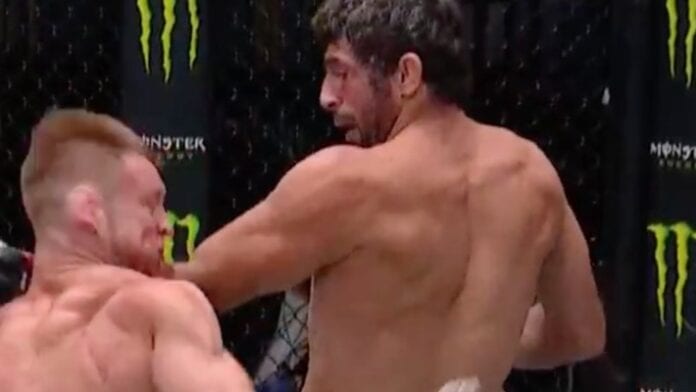 A knockout that can turn a match around in a second is the proverbial icing on the cake. We tell you, there have been so many bouts that are etched in our minds. Picking the top 10 from them has been a real challenging task. However, we have compiled this list of what we feel have been the 10 greatest MMA slam knockouts ever seen. Without any further ado, let’s take a peek into them.

This one turned out to be a true classic. Anderson “The Spider” Silva successfully retained his Middleweight Championship. Silva showed why he’s such a treat to watch when he landed a perfectly timed front head kick knocking Vitor Belfort cold. It was surely a scintillating display of a sudden attack by “The Spider.”

In what was one of the best knockouts to be recorded on video, exactly when the clock hit the 3:20 mark, Henderson delivered a brutal right hook. Bisping fell into the ground that very moment, but Henderson wasn’t happy yet. Henderson also threw a powerful forearm lunge to Bisping’s face.

This heated encounter was a match between Quinton Jackson and the supremely talented Ricardo Arona. Ricardo had Quinton in a triangle choke. In a flash, Quinton threw Ricardo into the mat and landed a knockout punch. It was a sudden and complete turnaround of the situation, which saw Ricardo lose the advantage in a flash.

It was tipped as a contest that would enthrall us all. It was one of the best knockouts ever as Barboza took a full 360-degrees whirl and slammed Etim’s jaw with a brutal heel. It had Etim frozen as he crashed on the canvas. It was a raw display of complete domination by Barboza.

There were many expectations of Mirko “Cro Cop” Filipovic, and it was thought that he would soon challenge for the UFC Heavyweight Championship. However, his title hopes evaporated after Gabriel Gonzaga landed a head kick to deliver an unexpected knockout.

This bout was another extraordinary display of clinical fighting. The UFC champ, Anderson Silva, used his lightning-quick reflexes to catch Griffin with a quick jab. Griffin crashed into the mat dazed, and it was yet another display of mastery over MMA fighting skills that “The Spider” Anderson possessed.

Fedor Emelianenko faced criticism in 2007 and 2008 when he chose to face exhibition-caliber competition over the best of the heavyweight category. Criticism changed to awe and admiration as Fedor flattened UFC Heavyweight Champion Andrei Arlovski in the very first round. People were stunned by such a dominating display.

The brutality of this fight was truly a jaw-dropping experience for the audience. Things started with Silva landing a crushing hook right on the face of Jackson that turned Jackson’s face to one side with its raw force. A series of Thai clinches followed it, one of the most brutal ever seen. Finally, Jackson staggered to the ground.

It was a very impressive first-round knockout. There were a few high-impact exchanges. A while later, Dariush landed a flush knee on Holtzman that almost brought the fight to an end. Dariush then delivered a spinning back fist sending the former crashing to the ground. The fight was halted at 4:38 of the first round.

Jordan knocked out veteran Matt Wiman in the very first round. Leavitt was looking for a takedown while Wiman locked up with him. As Leavitt was trying to bring things to the mat, he knocked out the veteran Wiman immediately with a brutal slam. The referee closed the fight officially at 22 seconds of the first round.

More to see in the future

The knockouts mentioned in this article were all stunning for their effectiveness and skillful delivery. It left the contestant at the receiving end dazed. However, there is still plenty to see in the future. In April, we get to see how Paul Capaldo successfully delivered a splendid spinning knockout against Chris Vasil.

Also, we witnessed as Adriano Moraes became the first man to get a stoppage win over Demetrious Johnson. Thus, there will be plenty of action for us to see or re-watch at our convenience. You can stream UFC events whenever you want if you use such services as ESPN+. However, there might be certain limits, like geo-restrictions that prevent you from streaming matches live. A streaming VPN can help in situations when you find yourself in another country that streaming providers do not support. People in the UK and Ireland can also use BT Sport to watch UFC online. Other possibilities include Kayo Sports in Australia and Sky Arena in New Zealand.