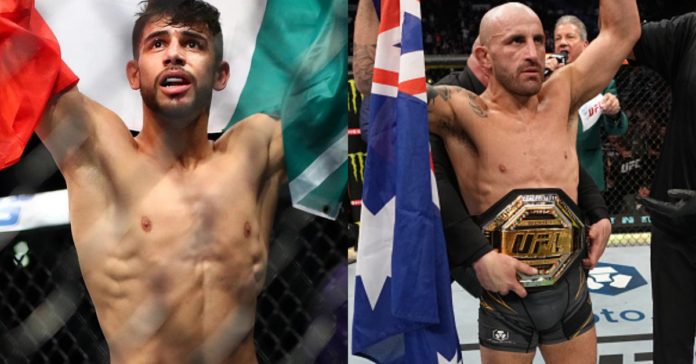 Mexico’s Yair Rodríguez is not happy with Alexander Volkanovski going up in weight in to challenge the lightweight king Islam Makhachev. ‘El Pantera’ went on Twitter to remind the featherweight world champion that he still has a duty to defend his title against the top contenders of his own weight class.

In 2023, the UFC is aiming for a champion vs champion showdown between Alexander Volkanovski and Islam Makhachev. Both fighters have verbally agreed to this.

The 30-year-old Rodríguez is displeased with this news. On Twitter, he said:

“Hey @alexvolkanovski Are you a man of your word? We had a talk in Dallas. Everyone knows I’m next”

‘El Pantera’ Yair Rodríguez believes that he is the top contender in the UFC featherweight division. However, fans do not seem very receptive to this idea. In 2022, he defeated Brian Ortega due to a shoulder injury. Previous to that, he took a loss in 2021 to Max Holloway. In 2019, he defeated Jeremy Stephens. Rodríguez is ranked no. 2 in the division officially, only behind Holloway.

Yair Rodríguez grew into a fan-favorite fighter during his 2015-2018 activity in seven bouts. During that time, he had incredible wars with ‘The Korean Zombie’ Chan Sung Jung and Alex Caceres. Additionally, he had impressive knockout wins over BJ Penn and Andre Fili.

Currently, ‘El Pantera’ has no fight scheduled and he does not want an interim title. Earlier this year, the Mexican-born fighter said:

“No, it’s not something that interests me to tell you the truth. I think even though there are very good fighters, I think they need to fight more or at least fight against fighters who are in the top five … They want to jump and fight with me, and I literally just won the opportunity to fight for a title. I don’t think that’s fair sincerely.” (Transcribed by MMAJunkie)