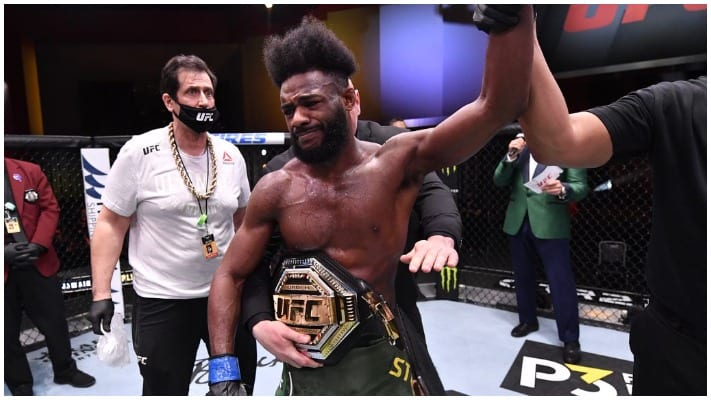 Aljamain Sterling is the babyface in the Petr Yan controversy.

That’s according to WWE superstar Big E who was commenting on the aftermath of the UFC 259 bantamweight title fight between Sterling and Yan.

Yan was well on his way to defending his title until he illegally kneed Sterling in the fourth round. Sterling was criticized for overacting soon after with the referee stopping the contest and disqualifying Yan.

As a result, Sterling became the new bantamweight king. But more than his alleged acting, it was what happened after that left a sour taste in the minds of many as he was seen celebrating and posing with the belt just hours after stating he didn’t want to win it that way.

Many believe he’s the heel (bad guy in pro wrestling terms) in this situation with some even stating that he should fully embrace it by not giving Yan a rematch.

As far as Big E is concerned, however, Sterling is still the face (good guy).

“Here’s the problem, when you’re determining heel and babyface roles, you have to know who your opponent is,” Big E told MMA Fighting. “His opponent is a frightening Russian man named Petr Yan. So if Aljo was to turn heel, he needs to do it against a guy who can be a babyface. I like Yan, I’m thoroughly entertained by him, I don’t find him to be the guy we can get behind as a babyface. So I would say no, I think Aljo is our babyface.

“He’s a charismatic guy. He comes out with the gold, dookie chain, he’s got the sweet, sort of like, high top ‘fro. That’s our babyface. I’d be okay with the heel turn if maybe, like, [Cory] Sandhagen I think is a babyface we can all get behind, maybe we do a bit of a turn there. I think if our next opponent is gonna be Yan, if I’m the booker here, I say we fight it, let’s keep our babyface Sterling here and let’s let Yan be the scary Russian man who knocks people’s heads off.”

Given how the combat sports world has reacted so far, though, it’s clear that Yan has become the babyface in the situation.