LowKickMMA.com
Home Combat Wrestling Whizzer: The History Of The Move And How To Do It 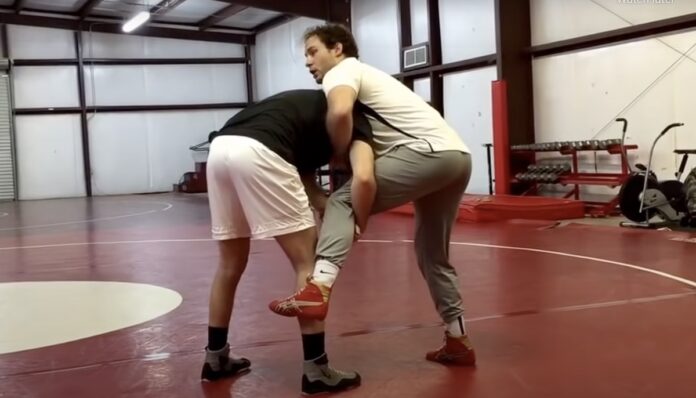 The whizzer is a wrestling move that is a fundamental technique that every young wrestler must know. It is so effective that it has been adopted within Jiu Jitsu and MMA.

Here is everything you need to know about the wizard and how you can use it within BJJ and MMA. We’ll also detail how the technique works and important tips you need to remember when doing the wrestling whizzer.

Who invented the wrestling whizzer?

The whizzer technique is one that has almost always been a part of wrestling. It’s gone by other names, but it’s most known by the whizzer name.

There have been a lot of purported claims about the origin of the name, but none of them can be verified.

One claim is that the move was named after former US Supreme Court Justice Byron “Whizzer” White. Although, White never wrestled or did any form of grappling.

Many people also mistakenly call the technique “the wizard” instead of whizzer. W-H-I-Z-Z-E-R.

How does the whizzer work?

The whizzer is an overhook used to defend a takedown, when you missed the sprawl. This overhook above your opponent’s elbow works much like a crowbar.

You use this overhook along with foot placement and your other hand to break your opponent’s grip and evade their takedown. This technique has been adopted in Jiu Jitsu and MMA with great success.

It has even been innovated into different set ups for sweeps and throws. Proving just how effective the whizzer is.

What’s the difference between the whizzer and an overhook?

From a glance, a wrestling whizzer looks exactly the same as an overhook, but they’re two very different moves. The whizzer is used to pull an opponent up to break their grip and prevent a takedown.

Once their grip is broken, your whizzer then turns into an overhook. Using it to force your opponent down instead of up with the whizzer.

The Whizzer from standing

The whizzer was mainly created to prevent an opponent from landing a single leg takedown. Once they grab ahold of your leg, you have to react immediately and hook their arm.

Always hook above their elbow to establish the best control over the arm. You’re then going to use your whizzer and pull your opponent up.

Doing this separates their body from their hands and makes it harder for them to keep their grip. Now, when you have the whizzer, there are two different scenarios that can happen.

You kept your foot planted on the ground or your opponent was able to lift your leg off the mat. If your leg is still on the mat, then keep it on the mat and keep driving into your opponent.

But if they were able to get it off the mat, you have to react quickly to defend the takedown. Hook your leg on the side of your opponent’s leg to balance yourself as you finish the whizzer defense.

When you pull your opponent up with your whizzer, your free hand is going to break their grips. Stopping their takedown and you now have a tight overhook to work with.

The whizzer to uchi mata

Landing a Judo throw like an uchi mata is a common set up off a successful whizzer. Of course, the first step will be to break your opponent’s grips.

Lift your opponent up with your whizzer and break their grips with your other hand as you keep a good base. Once your opponent’s grip is broken, you can now set up your uchi mata.

Keep good downward pressure on their arm with your overhook and pull them forward. As they come forward, you’re going to take two steps.

When done correctly they will go right to the mat.

On top of defending a single leg, you can also use a whizzer to set up a back take. When your opponent shoots in for their single leg, you’re going to do a small sprawl and catch your whizzer.

Switching sides with the whizzer sweep

The whizzer has been innovated to be used in variations of butterfly sweeps. If you’re in butterfly guard and your opponent grabs an underhook, you counter with a whizzer.

Obviously, since your opponent has an underhook, you aren’t going to be able to sweep them on that side. That is why you’re going to switch your base and secure a butterfly hook on their other leg.

Collar tie their head and push it to the side as you go on your side and kick your hook to sweep them. A very simple counter that works even against the most experienced grapplers.

Using a whizzer with the knee slice pass

Many grapplers have begun using the whizzer to help them pass their opponent’s guard. One of the most common passes that’s mixed with the whizzer is the knee slice pass.

Keep that pressure on their shoulder pulling it as you put your knee in position for the knee slice. Then grab your opponent’s other arm and pull it up as you drive your knee through to pass their half guard.

Important tips for doing the whizzer

The whizzer is a great defensive technique, but there are details that you’ll need to remember to have success with it. Here are the most important details for doing the whizzer.