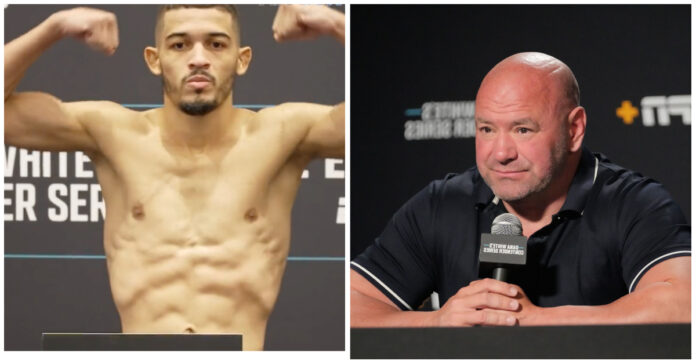 William Souza missed weight by a margin of over 10 lbs on Dana White Contender Series 47.

For the latest series of the popular mixed martial arts show, a total of 10 fighters took to the scales for the five scheduled bouts. There was one fighter who did not show up at the right weight, missing the mark by a considerable distance.

William Souza had agreed to compete against Farid Basharat in a bantamweight contest that required both athletes to come in under 136 lbs with the extra pound allowance permitted in nontitle fights. However, Souza ended up coming in at 146 lbs, over 10 pounds more than his opponent, who made the limit.

He broke the record for the biggest weight miss in the history of the Contender Series, which was previously held by Victor Reyna who came in seven pounds over in 2019.

It’s unclear why Souza came in so heavy. There were doubts that the bout might not get sanctioned given the disparity in weight between the two competitors. The Nevada Athletic Commission ended up canceling the fight.