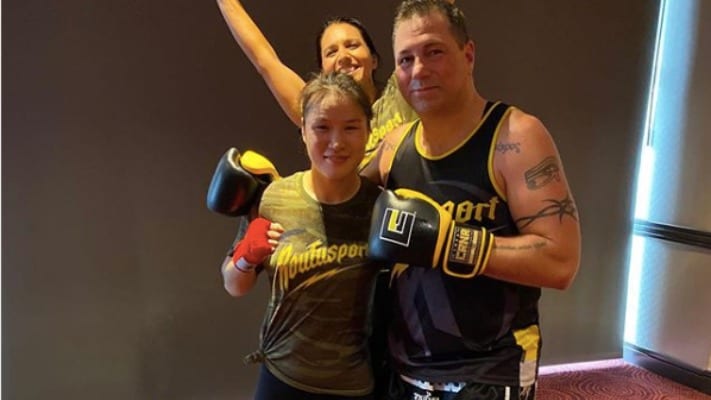 Duke Roufus will be training with another UFC champion. Roufus took to his Instagram to announce that he will be helping UFC women’s strawweight champion Weili Zhang prepare for her upcoming title defense against Joanna Jedrzejczyk.

Roufus will be working with Zhang towards the end of her training camp to help her get acclimated to the United States after coming from China.

“Martial Arts makes the World a better place & a smaller planet. I am excited to announce I will be assisting the @ufc Straw Weight Champion @zhangweilimma & her team for her Title Defense vs legendary Champion Joanna Jedrzejczyk March 7 in Las Vegas. Thanks Coach @cai8005457 & the great people from China for the friendship. Weili will finish her training at @roufusport with her whole team to acclimate to the USA. Special thanks to our friend @tulsigabbard for helping Weili obtain her Visa to the USA. Thank you very much @suckerpunchent for creating this wonderful friendship & collaboration “The Shaolin & Rou-Tang Could be Dangerous” @wutangclan #martialarts is #life ????#weilizhang #zhangweili #tulsigabbard #usa #china #chinese #mma #chinesemma #sanda #kungfu #gungfu #wushu #ufc #ufc248 @roufusport #roufusportmma #roufusport #routangclan #positivevibes“

Zhang won the 115-pound strap from Jessica Andrade via first-round knockout in China this past August. Now, she’s preparing to make her first career title defense against a woman who used to rule the strawweight division, Joanna Jedrzejczyk. Jedrzejczyk is on a two-fight win streak at strawweight, her most recent win coming against Michelle Waterson in Tampa via decision.

Now, two of the very best in the world will go head-to-head for the 115-pound title at UFC 248. The event, which will go down on March 7, has yet to receive an official location or venue.

What do you think about Zhang training with Roufus ahead of her bout with Jedrzejczyk? Who are you picking to win?