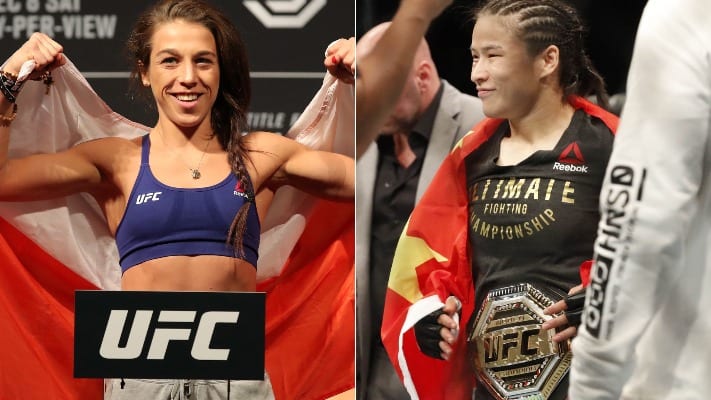 It looks like Joanna Jedrzejczyk will get the first crack at newly-crowned UFC women’s strawweight champion Weili Zhang.

MMA Fighting reports that verbal agreements are in place for Zhang to face Jedrzejczyk on March 7 at UFC 248 on pay-per-view (PPV). No location or venue for the show has been confirmed as of this writing. No official announcement on the title fight has been made either.

Zhang earned a strawweight title fight just three wins into her UFC career, thwarting Jessica Andrade with ease in front of her native Chinese crowd in August. A first-round knockout made her the first Chinese champion in UFC history. Now, she’ll take on former division queen Jedrzejczyk, who comes off a decision victory over Michelle Waterson in Tampa.

Jedrzejczyk has won her last two fights at 115 pounds, her only loss coming at flyweight in a title fight against Valentina Shevchenko back in December of last year. After some back-and-forth between Zhang and Jedrzejczyk through the media, it looks like they’ll finally lock horns in 2020.

In a recent interview, Jedrzejczyk suggested she was willing to travel to China to “beat the sh*t” out of Zhang in front of her own people.

“I signed an agreement before the fight with Michelle Waterson,” Jedrzejczyk said. “I knew that after I got the victory I was going to fight for the belt. This is what’s going to happen next, and I’m just waiting for the date and the location, and then we’re going to rock it.

Who do you think takes a fight between Zhang and Jedrzejczyk?