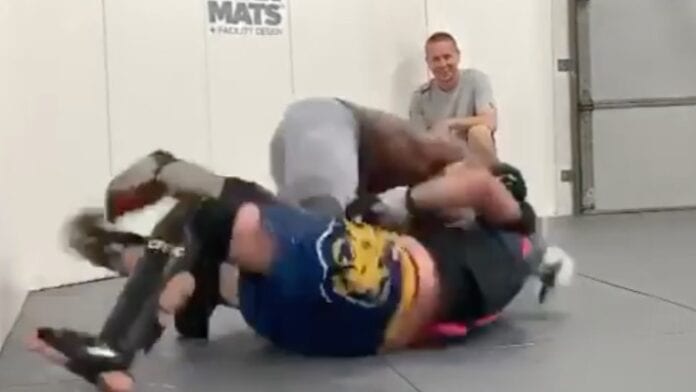 Usman will defend his welterweight title against Gilbert Burns in the main event of UFC 251 which takes place July 11 on Abu Dhabi’s Fight Island.

Given that they were teammates at Sanford MMA in Florida, Usman made the decision to move camps to Denver where he is now training under head coach Trevor Wittman.

Wittman notably trains Justin Gaethje and Rose Namajunas and it wasn’t a surprise to see him oversee Usman sparring with the former ahead of the title defense.

Gaethje posted a small snippet of it recently which you can watch below:

“Iron sharpens iron. How much would you pay to watch this for a few rounds? @usman84kg is looking like a straight killer. Glad to have him in the room. Just two dudes having fun 😂”

It’s a move that seems to be permanent as well with Usman wanting to change things up at this stage of his career.

“I think eventually I would have changed things up anyway,” Usman said. “We had a lot of welterweights at that gym. At some point, when you’re training with these guys on a daily basis and you’re the champion of the world, these guys know you in and out and if they get the better of you one day, they’re licking their chops thinking it’s their time. A little separation from that is good. It keeps that element of surprise, because these guys feel like they know you.

Wittman received heaps of praise for Gaethje’s performance against Tony Ferguson at UFC 249 last month. It should be interesting to see what changes he can bring to Usman’s game.

What do you think of the footage and Usman training with the likes of Wittman and Gaethje?