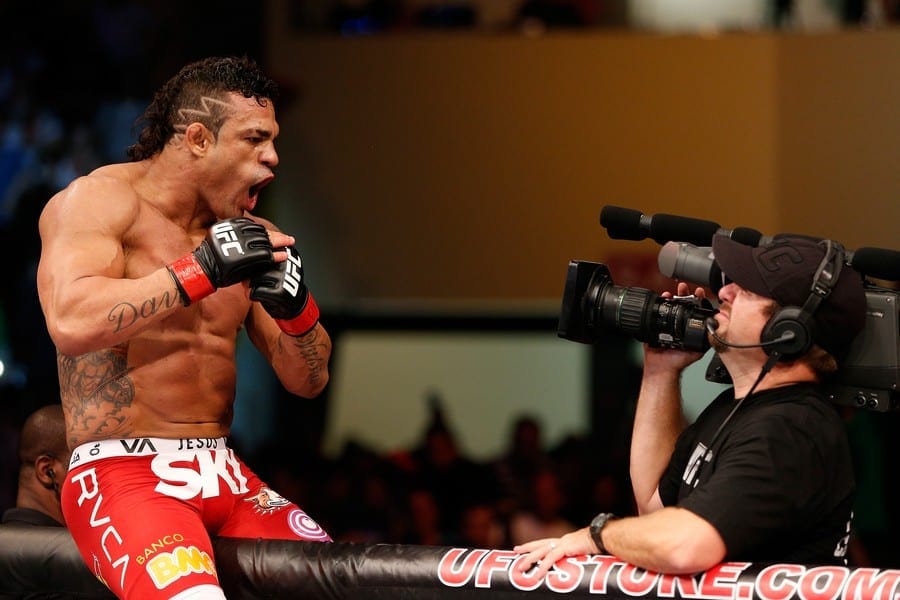 Brazilian UFC middleweight Vitor Belfort is coming off a UFC 187 title shot that was nearly two years in the making, and the result was not what he hoped for. A depleted and much smaller looking ‘Phenom’ got put on his back by defending champion Chris Weidman, and was pounded out in convincing fashion in the opening round of their May 23. Sin City burner. The loss halted a three fight win streak for Belfort, including 2013 knockouts of Michael Bisping, Dan Henderson and the next title challenger Luke Rockhold.

The 185-pound division moves on full steam ahead, with ‘The All-American’ and ‘Rocky’ colliding later in the year, and Belfort going up against old foe ‘Hendo’ for the trilogy maker at UFC Fight Night 77. Talking with Globo, as translated by MMAMania’s Adam Guillen Jr., the old school knockout artist from Brazil says he is hungry for another title fight:

“After Dan Henderson, I want the winner between Weidman and that trash talker Rockhold. I’m on the run. Either I go to my goals or I go out. It’s important to have a goal in life, focus, a place to get. The good thing about a new chance is that you can conquer it today. I’m focused on Dan Henderson now, on training, on going there and doing my job. I’m gonna go for the win, that’s the way I fight every fight. I’m back to training with Pedro Díaz, a great boxing and striking teacher. I’m very happy with my preparation. Today, I’m a business man who likes to fight. I do it because I love it and I really like to do it for my fans and for Brazil.”

Belfort certainly put an end to Rockhold’s trash talk in their first meeting, starching the former Strikeforce boss with a sensational spinning kick in front of his Brazilian supporters. It’s true that a long sit and the after effects of no more Testosterone Replacement Therapy had Belfort looking like a different man at UFC 187, he may be well advised to take baby steps in regards to a rematch with either Weidman or Rockhold, even with a win over Henderson.

Rather contrastingly, ‘Hendo’ looked in beast mode during his latest showing, startling Tim Boetsch early on in their June 6. showdown, bringing back his old days with a ‘H-Bomb’ KO win in round one. As Belfort vs Henderson 3 goes down in November, and Weidman-Rockhold meet on a likely December card, Belfort may well have some time to get back under the skin of the champ and the challenger if he can get a trilogy win.

The problem for ‘The Phenom’ is that Jacare Souza and Yoel Romero already have a much stronger case for a title fight, and rumour has it that they will face each other for the next title shot.

Stay tuned to LowKickMMA for more UFC and MMA news, updates and coverage!