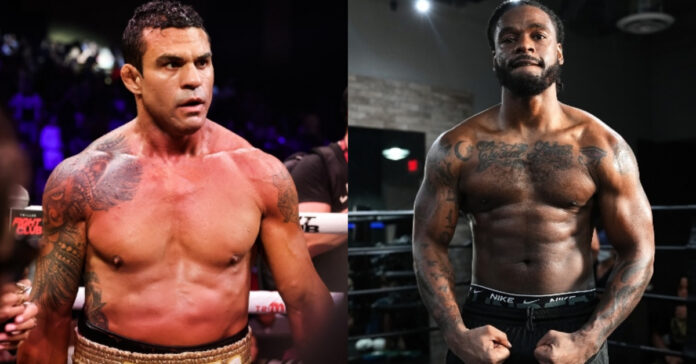 Vitor Belfort will mark his return to the boxing ring against Hasim Rahman Jr.

Rahman Jr. is coming off the first loss of his professional career in April. He faced James McKenzie Morison, son of Tommy Morrison, in a collision of two sons of the former boxing heavyweight champions. Morrison got the best of his opponent, scoring a win by TKO in the fifth round.

Following the outing, Rahman Jr. was slated to face YouTube sensation Jake Paul in a major move up in competition for the social media influencer. However, the bout never happened as Paul scrapped the whole card, which also featured Amanda Serrano as the double main event, claiming Rahman Jr. indicated that he would not make the contractual weight.

Vitor Belfort vs. Hasim Rahman Jr. is set for Oct. 15 in Sheffield, England

“It’s going to be a great show and I’m looking to put on a hell of a performance,” Rahman Jr. said on the broadcast (ht MMA Fighting). “My main goal when I put on a pair of gloves was to become a world champion like my father was so nothing is ever going to deter me from that. If this going to catapult me to be able to make the bigger fights at the end of the day, then I’ll go ahead and that route.”

MMA veteran Vitor Belfort has been expanding his footprint in the sport of boxing. He defeated the legendary boxer, Evander Holyfield, via first-round TKO in an exhibition match in Sep. 2021. Although Belfort came out on top, he faced a much older Holyfield, who went into the outing at the age of 58.

Next, Belfort pursued a clash with former boxing champion Oscar De La Hoya, who appeared to be willing to entertain the idea. “The Golden Boy” ended up contracting a severe case of COVID-19 and the match was called off.