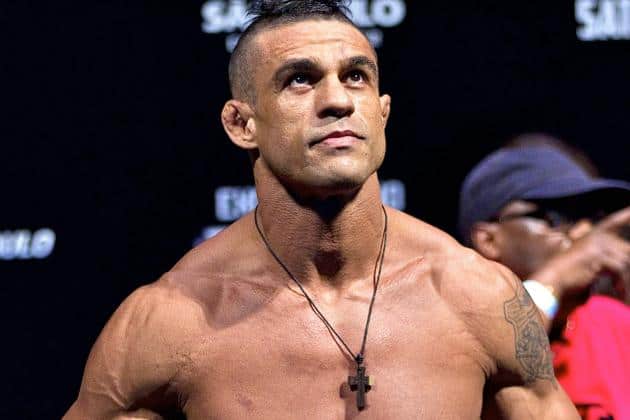 Despite the fight that he is on a losing streak and is 39 years of age, Vitor Belfort doesn’t he’s in a bad moment of his career. The former UFC champion is set to return to the Octagon on March 11th at a Fight Night event against rising talent Kelvin Gastelum. During a recent interview with MMA Fighting, Belfort grew upset when asked what he was doing to bounce back after going 1-3 in his last four bouts.

“Who said that? Who said it’s a complicated (moment)?” Belfort replied when asked. “Are you answering the question for me?”

Belfort is in the middle of his worst run since 2005 when he lost three bouts in a row against Randy Couture, Tito Ortiz, and Alistair Overeem. However, numbers do not matter to Belfort.

“Who said it’s complicated? I fought the two best fighters in the division, so it’s actually not complicated, it’s an opportunity for me to rewrite my story,” Belfort said. “It was a misstep. That’s the problem in fight (business). People have the loss as the worst moment, but it’s the best moment, the time where I can rewrite my story again. Unfortunately, that’s how men see things. When someone loses, they want to bury them. They create the idol, and then wants to destroy the idol. It’s a cultural thing. People need to see difficulties as an opportunity. That’s the way I see it.”

Back in November of 2015, Belfort finished Dan Henderson by first round knockout but then suffered TKO losses to Chris Weidman, who held the UFC middleweight title at that time, and middleweight contenders Ronaldo Souza and Gegard Mousasi.

“People talk about losses, but my last fights were against the toughest guys,” Belfort said. “Nobody wants to fight these guys. Everybody is running away from them. It’s obvious that I didn’t fight the way I should, but there’s the mistakes I made in the fight and there’s their qualities, too. You can’t define a person by two fights. That’s what needs to change. To rewrite my story, to learn new things, to grow. To look ahead. There’s light at the end of the tunnel. Come on!”

Belfort has a plan to get back to his winning ways and that is to train with Anderson Franca, striking coach of Edson Barboza, and added MMA veterans Cassiano Tytschyo and Sergio Junior to his camp. He is also training with Rafael Romano from natural gymnastics.

Belfort is excited to face a talent like Gastelum but did acknowledge that this was not the original idea for his next bout which will be in the main event in his native country.

“They offered me (Derek) Brunson and I said yes, but he didn’t accept to fight me,” Belfort said. “After that, Kelvin asked to fight me and I accepted it. Here we are. I’m a man who likes challenges. It’s always good to know that people want to fight you,” he continued. “”You’re a legend and people want to prove themselves, test themselves, and for me it’s important. The same way I’m a motivation for the young (generation), I have them as motivation for me. I want to test myself. I think it’s going to be great,” Belfort added. “I want to fight those who are at the top, those who want to fight me. He’s aggressive and comes forward. It’s a good match-up. I think it’s going to be a great test, a great competition for me. I’m motivated and confident. I’m sure of the victory.”

Belfort will celebrate the 20th anniversary of his UFC debut a month before his next fight and doesn’t understand the way that some fighters act now.

“I see fighters choosing fights, turning down fights,” Belfort said. “The current champion, the p*ssy (Michael) Bisping not wanting to fight anyone, (Chris) Weidman choosing fights, (Luke) Rockhold running from fights, people saying they are injured. It’s sad to see the sport… How many times did the Chicago Bulls lose to the Los Angeles Lakers, and how many times did they win? We have to stop saying that’s it’s over when someone loses. It’s part of the sport. The important thing is to compete against the best. That’s one of my qualities.”