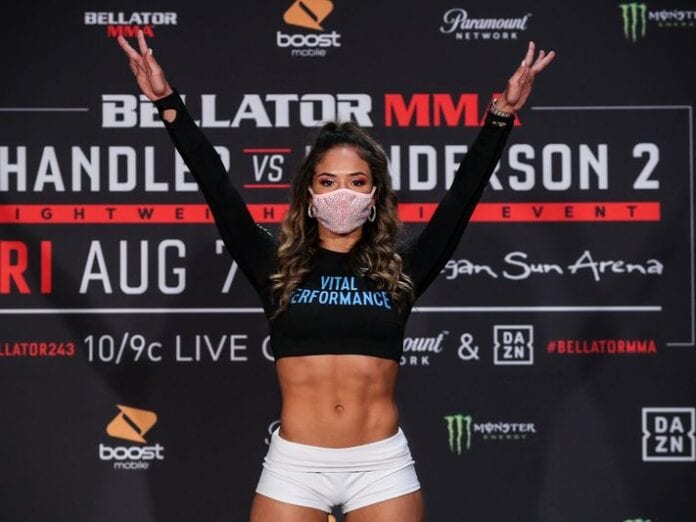 Last night at Bellator 243 Valerie Loureda walked off with her most impressive victory to date. Scoring a second-round KO over Tara Graf to improve her professional record to 3-0 with 2 KOS and 1 decision, leaving her as a great prospect to keep your eye out for. Tara Graf on the other side is now 1-2 and at a peculiar place, how will she bounce back from this upsetting knockout loss?

Loureda stuns her opponent with a huge right hand dropping her, then following up to the ground to finish the fight with ground and pound as the round ends.

Check out the amazing knockout below:

Following her emphatic win, Valerie Loureda told explained to reporters why she was so eager to smash Graff’s face.

“You’re telling me I’m being demoralizing to the sport… I waited until I got this opportunity to destroy her face.”

Loureda has faced criticism in the past for her activity on social media. However, the budding star has made it clear she is not trying to attract the wrong type of attention.

“I don’t do anything for social media,” Valerie Loureda told reporters at the Bellator 243 virtual media day. “I do things for myself. For example, I am an extreme girly-girl outside of the cage. So the way that I market myself, it’s not for social media and it’s not for men. This is the way that I look. I’ve worked my whole life to have this body, to have this figure—I was a ballerina, I’ve been a martial artist.”

“I think that’s where people mistake. It’s not for social media. I am the way that I look like, but I’m also a fighter. What does one thing have to do with the other? Just because I look different than other martial artists doesn’t make me any different. It’s my identity, this is why Valerie Loureda is different.” (R/T BJPenn.com)