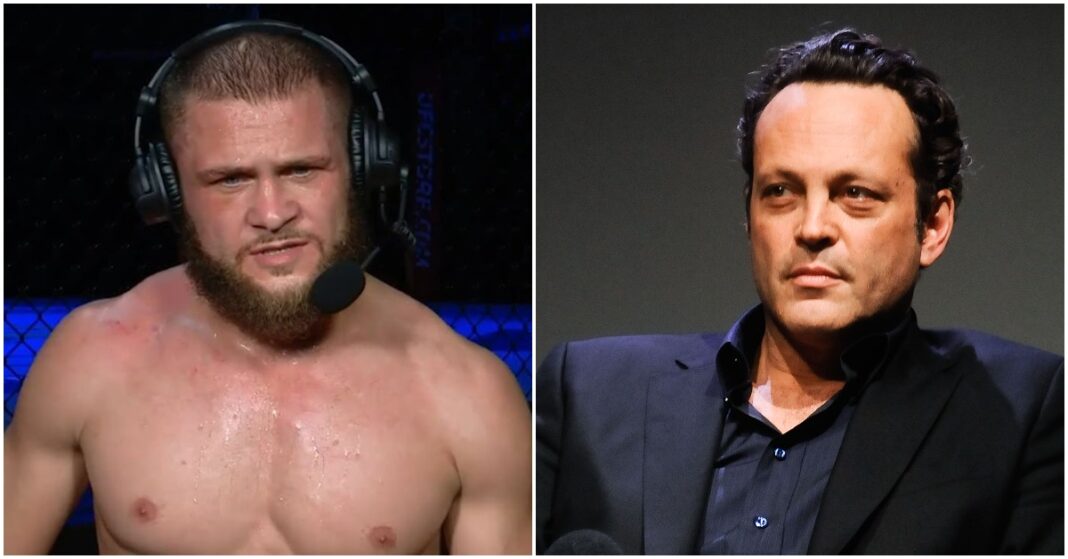 Streaking lightweight contender Rafael Fiziev stole the show at UFC Vegas 44 when he scored a highlight-reel knockout win over Brad Riddell before getting on the mic and issuing a bizarre call-out.

In the co-main event of the evening, Fiziev finished off his opponent who he caught and finished with a spinning wheel kick in the final frame.

The ecstatic 28-year-old then got on the mic to chat with Daniel Cormier about his win before calling out Hollywood legend Vince Vaughn who was sitting cageside.

“Give me three months, and I’m ready to fight again,” Fiziev said. “We have one legend here, maybe he wants to fight with me. Yeah, his name Vince Vaughn … Yeah, I love him.” (Transcribed by Sportskeeda)

The callout was a catalyst for some cheers and laughter from the crowd. Vaughn clearly took the fight offer with the jest it was intended, hitting Fiziev with the thumbs up and a round of applause as he exited the Octagon.

What’s Next For Rafael Fiziev?

A match-up between Fiziev and Vaughn doesn’t really seem viable, so the question is who will be next for the Kazakhstani-Kyrgyzstani fighter.

Fiziev is currently riding a five-fight win streak that includes victories over the likes of Marc Diakese, Bobby Green and Renato Moicano.

Ahead of UFC Vegas 44, Fiziev was ranked at #14 in the lightweight division, while his opponent was sitting at #12.

On Tuesday, the UFC rankings will update and you’d imagine Fiziev will climb a few spots and maybe even crack the top 10 after such an impressive display on Saturday evening.

If the UFC decides now is the time to push Fiziev he could be matched up with the likes of Tony Ferguson or Rafael dos Anjos. Although it seems more likely that he will fight someone just inside the top 10 – Gregor Gillespie seems to be the obvious match-up.

Who do you want to see Rafael Fiziev fight next?