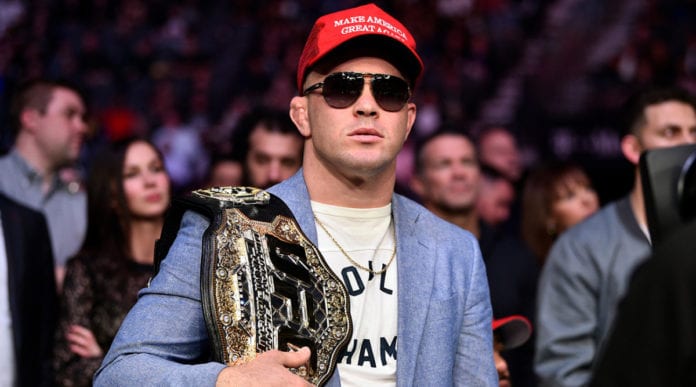 Covington and Woodley will finally settle their differences inside the Octagon and although it is a massive fight, Covington is not doing any media. But, he broke his silence with a video message with Trump who wished “Chaos” luck in the fight.

“I’m gonna be watching Colby, I’m a big fan of Colby, he’s a winner and he’s a champ. It’s gonna be a great evening, a great fight, and I just wish him the best of luck. I’ve seen him a lot and he is tough – good luck champ.”

Colby Covington is coming off a fifth-round TKO loss to Kamaru Usman for the welterweight title at UFC 245. It was a competitive fight with many thinking Chaos was winning until he got dropped twice and eventually finished in the final round. Before that, he beat Robbie Lawler by decision after taking a year off after winning the interim title and not getting the title fight.

Tyron Woodley, meanwhile, is on a two-fight losing streak and no doubt needs to get his hand raised here. He is coming off two dominating losses to Gilbert Burns and Kamaru Usman to lose his belt. But, if he goes and beats Covington, “The Chosen One” would be right back into contention atop of the stacked welterweight division.

UFC Vegas 11 lineup is as follows: