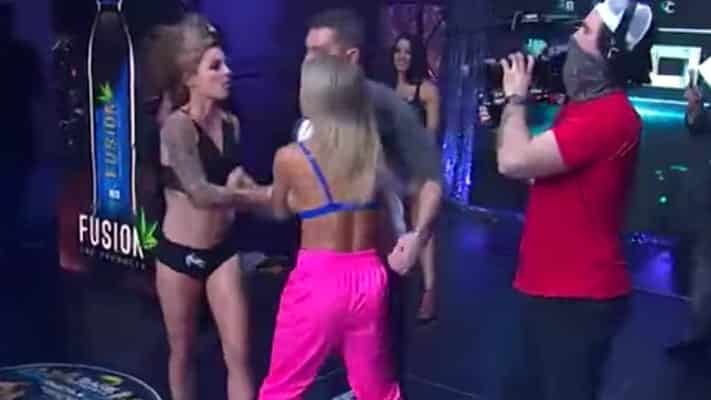 Things got a bit physical when Paige VanZant and Britain Hart had their staredown on Thursday.

The pair are set to collide in the headliner of Bare Knuckle FC’s KnuckleMania event taking place Friday in Clearwater, Florida.

And Hart certainly isn’t a fan of the bare-knuckle newcomer as she got right in VanZant’s face during the staredown.

That led to VanZant shoving Hart’s throat before the pair started to get more physical until BKFC president David Feldman stepped in.

“This ain’t f*cking MMA, you can’t choke,” Hart said. “Get the f*cking rules right before you come into the f*cking game. How about that? Get the rules right. I will touch you first tomorrow.”

You can watch the exchange below (via MMA Fighting):

VanZant will notably be making her bare-knuckle debut on Friday.

She last competed at UFC 251 in July where she suffered a submission defeat to Amanda Ribas. It was the last fight of her UFC deal before she was released and ultimately made the move to BKFC.

Hart, meanwhile, is coming off a fourth-round knockout of Randine Elkholm at BKFC 14 in November.

Do you have VanZant winning her BKFC debut?