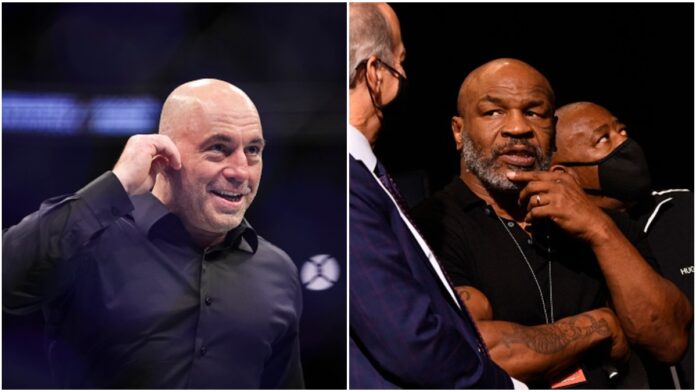 After viral news of Mike Tyson assaulting someone on a plane surfaced, the world was shocked and caught totally unaware. Now, Joe Rogan has weighed in on the incident. Giving his opinion on the assault and how Tyson was provoked into it.

“That’s real simple, that dude was a douchebag,” Rogan said on his podcast. “He was annoying one of the baddest motherf*ckers that’s ever walked the face of the earth… that’s not even (like) kicking a beehive, that’s like headbutting a beehive,” he would conclude.

As far as the assault situation goes, video and witness evidence all seem to show that Mike Tyson was indeed provoked into the attack. He was being harassed and ridiculed by the seemingly-drunken fan, and almost lured into the ordeal.

In fact, most people’s opinion on the assault was that they didn’t “blame” Tyson for what he did. Many say they would’ve done the same thing in that situation, basically insinuating the man who harassed the boxing legend “deserved” what he got.

Joe Rogan and his guest for the show would continue discussing the situation, talking about how foolish the guy was to provoke Mike Tyson in such a manner.

“That guy was probably on a bunch of sh*t. The guy who Mike Tyson punched, according to the New York Post, has a lengthy criminal history…” Rogan said. “If you find yourself (in a situation) where Mike Tyson is reaching over the back of an airline seat to punch you in the face, I think you’ve probably earned it.”

“The guy was super annoying… People get crazy, they think that just because he’s Mike Tyson, he’s famous, he can’t just punch you… he’s just gonna hit you like a normal person would.”

Here’s the full clip of Rogan and his guest discussing the incident:

This is the original video of the airplane assault:

What are your thoughts on the Tyson airplane assault situation?